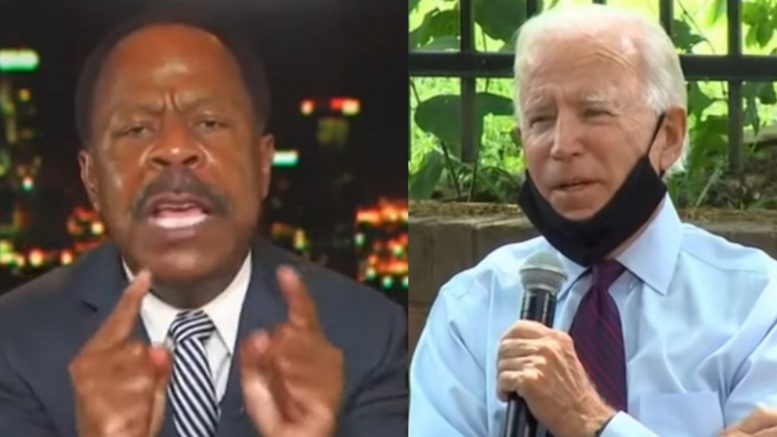 Civil rights attorney and longtime Democratic commentator Leo Terrell is now urging American Democrats not to vote for Joe Biden and Democrat mayors because they are “pandering the black vote” and are “just playing politics.”

Terrell went on to claim that the Democratic Party has been “hijacked” by Black Lives Matter and later suggested it’s time for all “law and order Democrats to leave the party.”

“Please American Democrats – Do not give #JoeBiden & Democrat mayors your #vote. They are pandering to the black vote & just playing politics.

“These people are just playing politics to prevent @realdonaldtrump from reelection. #Trump has done more for black Americans than current #Democrats in power.

Every #Democrat needs to ask themselves why they still support the Democratic Party. It has been hijacked by #blacklivesmatter.

I don’t need #NancyPelosi to take a knee. I need her to improve education opportunities & make real changes for poor & minority neighborhoods.” Continued Below

Moments later, Leo called on all “law and order Democrats to leave the Democratic Party.”

“I am asking law and order Democrats to leave the party,” he tweeted. “#Blacklivesmatter and #Socialists have hijacked the party. It is no longer the party of #JFK.”

I am asking law and order Democrats to leave the party. #Blacklivesmatter and #Socialists have hijacked the party. It is no longer the party of #JFK. @seanhannity @realDonaldTrump @marklevinshow @FoxNews

In ending, here is a video of Leo Terrell explaining more in depth why he is so “disappointed” in Joe Biden and the Democratic Party:

James Woods: ‘If an Individual Won’t Speak Publicly Unless a Teleprompter Is Used, Why Bother to Speak at All?’