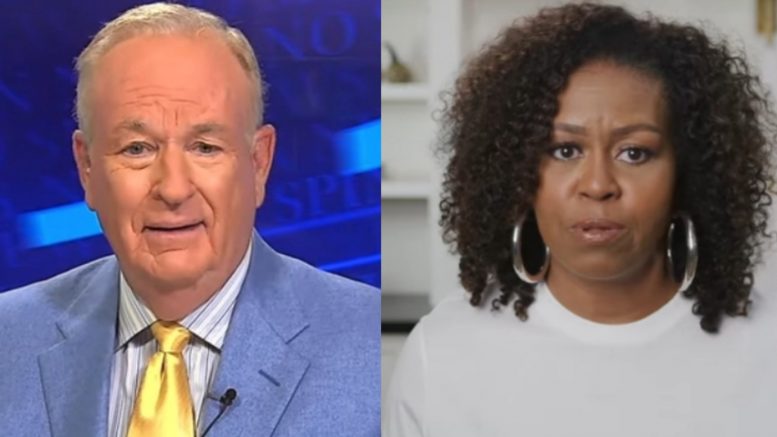 Bill O’Reilly has a bone to pick with Michelle Obama over her claim that she’s “dealing with some form of low-grade depression,” which she said is a direct result of having to watch “the hypocrisy” of the Trump Administration.

“These are not, they are not fulfilling times, spiritually,” Mrs. Obama told journalist Michele Norris during The Michelle Obama Podcast. “I know that I am dealing with some form of low-grade depression. Not just because of the quarantine, but because of the racial strife, and just seeing this administration, watching the hypocrisy of it, day in and day out, is dispiriting.”

“I have to say that waking up to the news, waking upnto how this administration has or has not responded, waking up to another story of a black man or a black person being dehumanized or hurtbis a weight that I haven’t felt in my life in a while,” Obama added.

In response, Bill O’Reilly said that he genuinely likes Mrs. Obama, who he considers to be a “gracious” former first lady. However, her claim of being depressed because of the Trump Administration’s treatment of African Americans is “just so far out.”

“So, you were the first lady, and your husband was the most powerful man in the world. The same stuff that’s happening now…happened when your husband was president,” O’Reilly addressed as if he were talking directly to Mrs. Obama. “The same thing — the system hasn’t changed since Trump has taken office — not worse, in fact, it’s better.”

“The confrontations — police with law enforcement — have gone down. Salaries for African Americans have gone up, a lot,” he continued. “In fact, if salaries had been as successful as Donald Trump running the economy, Trump wouldn’t be President. Hillary Clinton would have won.”

“I understand the Obamas don’t like Donald Trump. I have no problem with that,” O’Reilly declared. “And Donald Trump doesn’t like the Obamas…That’s the way it is.”

“…But to be depressed, Mrs. Obama? To tell the world you’re depressed because of what this administration is doing, when it’s the same thing happened in eight years under your husband — were you depressed then?” he questioned.

“Look at the stats: wages are up before the pandemic for African Americans a lot, jobs were up, police confrontations are down, and you’re depressed now, but you weren’t depressed then? That’s just politics,” O’Reilly concluded. Video Below

Greg Kelly: “America Is Due For An Epic Shock…This Is Fightable. This Is Winnable.”