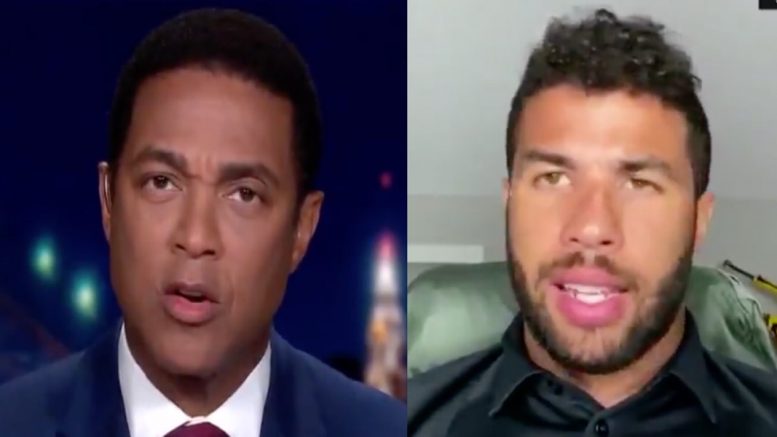 During Tuesday’s airing of “CNN Tonight” with host Don Lemon, NASCAR driver Bubba Wallace dismissed the FBI investigation that concluded an alleged “noose” found in the garage he was recently assigned to at Talladega Superspeedway was a garage door pull, which had been there since last year and not a hate crime directed at him.

In the CNN interview, Bubba Wallace insisted that the rope is “a straight-up noose”, though he confirmed he had not personally seen the rope– only photos of it.

NASCAR released a statement Tuesday, saying “The FBI has completed its investigation at Talladega Superspeedway and determined that Bubba Wallace was not the target of a hate crime.”

Appearing on CNN after NASCAR’s statement, Bubba Wallace told Don Lemon: “I’ve been racing all of my life. We’ve raced out of hundreds of garages that never had garage pulls like that. So people that want to call it a garage pull and put out all the videos and photos of knots being as their evidence, go ahead, but from the evidence that we have– and I have– it’s a straight-up noose.”

“The image that I have and I have seen of what was hanging in my garage is not a garage pull,” says NASCAR driver Bubba Wallace.

“It was a noose. Whether tied in 2019, or whatever, it was a noose." https://t.co/LpRUdKboaH pic.twitter.com/hQGreK5Ofs

Before the FBI had concluded its investigation, Bubba Wallace told “The View” on Tuesday of the rope: “It’s simple-minded people like that, the ones that are afraid of change…”

.@BubbaWallace on those who believe the noose incident was staged: “It’s simple-minded people like that, the ones that are afraid of change, they use everything in their power to defend what they stand up for… instead of trying to listen and understand what’s going on.” pic.twitter.com/FikMntalwO

4) Here's the picture of Garage Bay #4 (taken Monday) with some notations to help: pic.twitter.com/FZjslo3n8a

6) And finally here's the side-by-side that shows the manual garage door pull hand loop in place [Nov '19] and the hand loop (purposefully identified as a "noose") missing or cut-off [June 22, 2020]

‘Wow!…Yikes!’: CNN’s Berman On Inflation Surging To 7% In December; Highest Rate In 40 Years