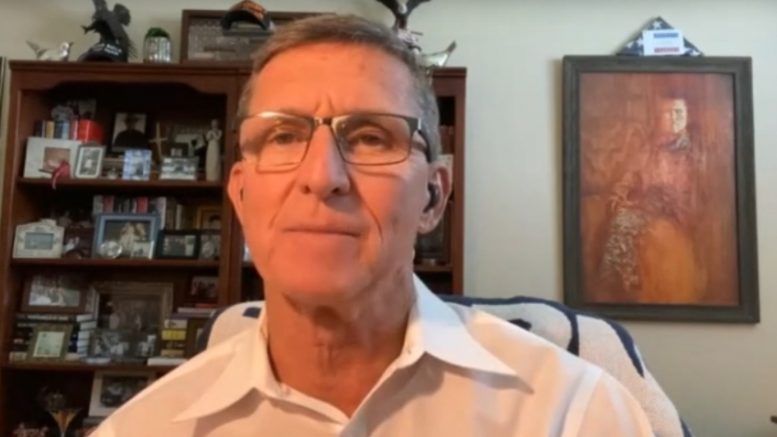 Retired Army Lt. General Michael Flynn is now calling for the FBI to get a “complete transformation” or be “abolished.”

Flynn, who served as both a DIA director and National Security Advisor, pushed for major changes to the FBI as more and more details come to light regarding Special Counsel Robert Durham’s investigation into the origins of the Russian collusion probe.

Back in February, Durham filed the government’s motion to inquire into potential conflicts of interest in the Michael Sussmann case, which alleges Hillary Clinton’s 2016 campaign paid a tech company to “infiltrate” Trump Tower and White House servers in a bid to establish a link to Russia. Since then, damning revelations have surfaced including that federal intelligence agencies were aware that Russian made Yota-phones were allegedly used by Hillary Clinton allies to spy on Donald J. Trump during the 2016 campaign and while he served as President.

“The information flowing out of Durham’s filings and the vast amount of emails, texts, reports, etc, etc…show that the Russia-Gate bullshit was exactly that, bullshit (excuse my Irish!),” Flynn wrote on Telegram.

“In my expert judgement of the federal government and my expert judgement as a senior intelligence official, the FBI needs a total and complete transformation or it needs to be abolished (at this moment, I favor the latter, but I’ll leave a glimpse of light to be convinced otherwise),” he continued. “The embarrassment and the incompetency as well as the criminal behavior of senior members of the bureau demonstrate a level of corruption that is beyond the pale. Additionally, select senior elements of the intelligence community inside the ODNI and the CIA need to be brought to account. They know they committed an egregious level of sedition in their effort to usurp the presidency of the United States of America thus the American people.”

“If you can’t tell I’m pissed, then you are asleep. I’m upset but I am totally focused on staying the course of getting the American public back in the game. We have one shot this November…we better wake up America and get out to vote all the bums out (both parties). Enough said … for now,” Flynn concluded. See Below