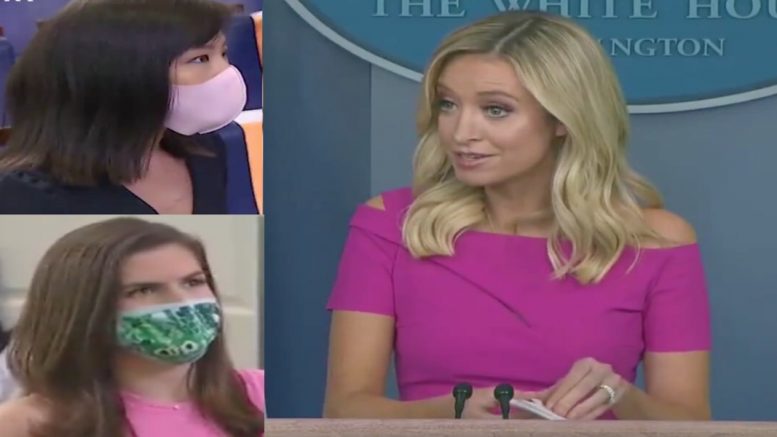 During the president’s rally Saturday in Tulsa, Oklahoma, he spoke the about the coronavirus and mentioned that the virus “has more names than any disease in history”, adding, “I can name Kung Flu. I came name 19 different versions of names.”

Monday during the White House press briefing, reporters repeatedly asked press secretary Kayleigh McEnany why the president used the term “Kung Flu”, but she reminded the press over terms, they and the networks they work for, have used.

President Trump explained to the crowd that COVID-19 has several names:

During Monday’s press briefing, left-wing reporters were dead set on on pressing McEnany over the president’s mentioning of “Kung Flu”, calling it “racist”.

CNN’s Kaitlan Collins told McEnany that labeling the coronavirus “Kung Flu” is different than calling it the “Chinese coronavirus”, but the press secretary reminded the CNN reporter that the media and the network she specifically works for have “repeatedly used the term “China Virus and Wuhan Virus”.

McEnany also told Collins that CNN has “gone on to deride the president as somehow using a term that they themselves have never used”, then she listed off dates and when CNN labeled the virus as “Wuhan coronavirus”. Video Below

CBS News Weijia Jiang also pressed McEnany, which the press secretary told Jiang the president is pointing out the origin of the virus.

Asked what the president’s message is to Asian Americans offended by his use of the phrase, McEnany said President Trump has “said very clearly that it is important to protect our Asian community in the U.S. and all over the world.” Continued Below

“They are amazing people, and the spreading of the virus is not their fault in any way shape or form,” McEnany said. “It’s not a discussion about Asian Americans, who the president values and praises as citizens of this country. It is an indictment of China for letting this virus get here. … While the media wants to focus on nomenclature, the president is going to focus on action”.

When asked if the president regrets using the term Kung Flu, McEnany said the president “never regrets putting the onus back on China, pointing out that China is responsible for this”.