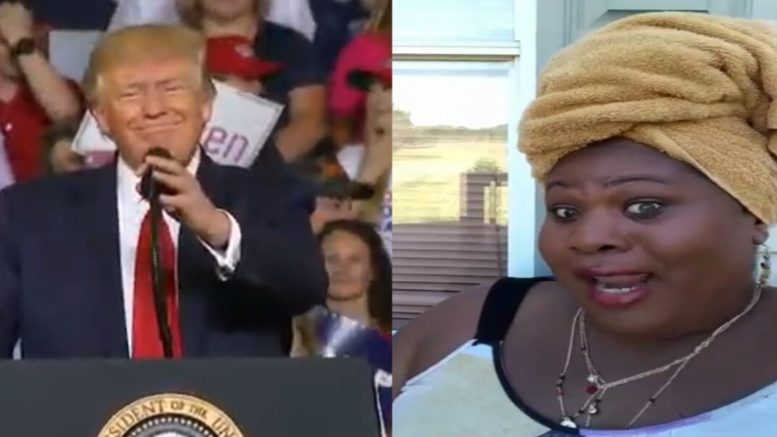 Monique Worthy, a Trump supporter who tells it how she sees it, gave her thoughts on people calling President Trump “racist.”

This comes amid the recent “squad drama” and the “overblown outrage” Democrats and left-wing media have falsely peddled toward the President.

In a video she posted on Twitter, Monique wrote, “Let’s take a moment… To point something out when it comes to people calling my president racist…”

She began in her video, “Is Donald Trump really a racist? No, I can’t say that he is. I ain’t never heard of him being racist since prior to running for President. That’s just me though.”

“I mean, because any two way you look at it, the man won his Presidency without the black vote. What [does] he need it for?” Monique asked. “What [does] he need us for? Tell me, what he need me for. He don’t need me.” (Continued Below)

Monique pointed out that when President Trump steps on the stage at rallies or events, he talks about “how low” the black unemployment is. “He don’t need to do that, he just do it,” she expressed. “[Be]cause he legitimately cares.”

“You never heard Obama get on stage talking about black unemployment. He couldn’t, [be]cause under his first two years with a Democratic Congress, it doubled! Black unemployment under Barrack Obama doubled. How many of ya’ll know that? It doubled, it literally doubled. It went from 8% to 16%. How you get around that with no media saying nothing?” she asked.

“But Donald Trump, [is] getting it to the lowest it’s ever been recorded,” Monique continued. “Like I said, he don’t need us. He does not need the black vote. The black vote didn’t put him in office, the black vote is not gonna take him outta office. But the fact that he gets up there on them stages every chance he gets and tells us how we are doing, because… I ain’t gonna say that. We too crazy to realize it ourselves. Ya know what I’m saying?” (Continued Below)

Monique continued, “He ain’t’ gotta do that. He ain’t gotta get up there when he was running for President… he didn’t have to get out there and talking about ‘What do you have to lose? Vote for me.’ He didn’t have to do that, but he did and we’re grateful that he did.”

“You know, there’s some smart folks out there that happen to be darker skin, like me, you just gotta find them. See a lot of them are scared to say something because they’re scared somebody [is] gonna say something back to them. Me? I’m gonna step. What’s up? You got something to say about Donald Trump? What?” She asked.

Monique concluded,” I ain’t go no MAGA hat. My damn head is too damn big to be trying to wear a MAGA hat, so I can’t wear a MAGA hat. But, I gotta MAGA sweater in there I wear! I wore it to work, nobody said nothing. I’m a big ole b*tch, they better not say nothing.”

(Related: Mike Huckabee Turns The Tables On The Squad Exposing Their Guilt: ‘When [You] Throw A Rock Over A Fence, The Hit Dog Hollers’)