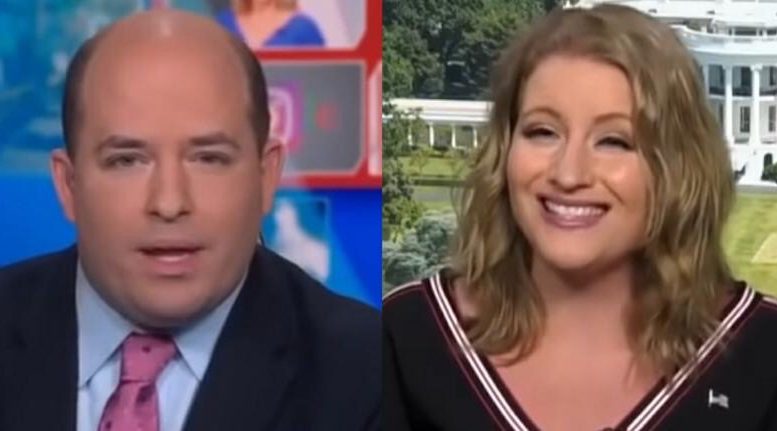 Sunday on CNN’s “Reliable Sources”, senior legal adviser to Team Trump and an attorney to President Donald Trump, Jenna Ellis, leveled Brian Stelter when she accused the CNN host for being an “activist” instead of a “journalist.”

Stelter had pressed Ellis over a cease-and-desist letter the Trump campaign sent to CNN pertaining to the network’s recent poll, indicating that Joe Biden has taken a 14-point lead over the president.

The letter sent to CNN stated that the network’s poll is “intentionally false, defamatory, and misleading” with the goal of harming President Trump’s reelection changes. CNN dismissed the request.

“Media polls such as these are designed to manufacture an anti-Trump narrative and misinformation and mislead actual voters. It’s a stunt and a phony poll to cause voter suppression, stifle momentum and enthusiasm for the President, and present a false view generally of the actual support across America for the President,” the letter stated, calling CNN’s poll a “biased questionnaire” with “skewed sampling.”

The poll in question was among a sample of 1,259 respondents and conducted via phone from June 2-5, 2020, according to CNN. Fifty-five percent of responders said they would vote for Biden, compared to 41 percent for Trump.

The letter, which was addressed to CNN Worldwide president Jeff Zucker, noted that only 25 percent of participants were Republicans and was conducted prior to positive economic news that was released on Friday, Fox News reported. Continued Below

“You’re not putting out facts and this is why you’re fake news,” Jenna Ellis told Brian Stelter on Sunday. “You call yourself a journalist Brian, and it is your job to report the facts and let the people decide. Your ratings are so bad and so in the tank, because America knows that CNN publishes activist agenda against President Trump, rather than just reporting the facts.”

Asked if the Trump campaign is going to sue CNN over a poll, Ellis told Stelter: “We have already sued you for false and defamatory statements. Again, you’re a defendant in case that we already brought.” Continued Below

Stelter said, “Right, because you don’t like an opinion piece that was published.”

Later in the interview, Stelter said that President Trump called out MSNBC and CNN for his “distaste for news coverage”, to which Ellis pointed out the president “has an opinion”.

“Brian, he has an opinion. He’s also a citizen. He is the first one to actually use his platform as an American citizen to be able to call out the fake news media and say because you are peddlers of false information– you have for the past three and half years,” she said. Video Below

Stelter then claimed: “Someday you are going to regret this that when your kids and your grand kids look back at this time and use slurs and smears like fake news to hurt news outlets. I think that in 10 or 20 years, if we could just sit down and talk about this, you’re gonna recognize how damaging it was– how damaging it was to use terms like fake news– to attack journalist who were trying to do their jobs.”

“You’re not trying to do your job. You’re not a journalist Brian, you’re an activist. That’s the problem. You have an agenda and your agenda is anti-Trump. The American people see through that, and they’re very grateful that this president is finally holding the fake news media accountable because you’re activists,” Ellis declared, leveling the CNN host.

CNN’s @BrianStelter complains about the term “Fake News” and tells @JennaEllisEsq that she will regret using “slurs” when her kids and grandkids see this one day.

She fires back:
“You’re not a journalist Brian, you’re an activist.”

Jenna Ellis tweeted after the interview with Brian Stelter, wondering if the CNN host “thinks it’s okay to put out factually false statements on CNN”.

I’d still really like to know if @brianstelter thinks it’s okay to put out factually false statements on CNN or any media platform.

This is why America doesn’t trust activists who pretend to be journalists.

The Trump campaign cease and desist letter to CNN: