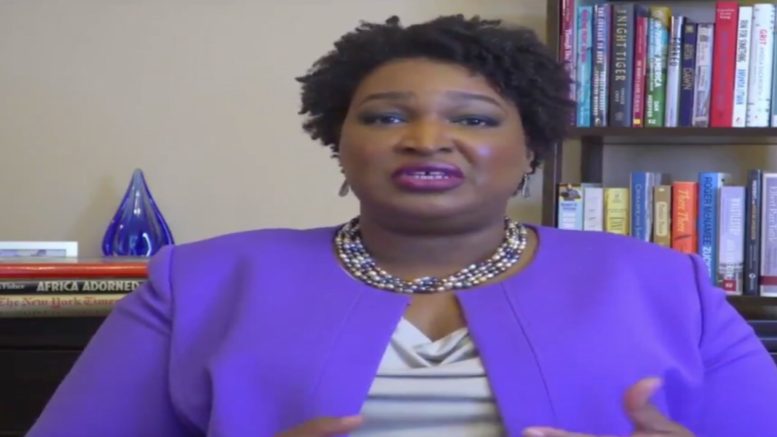 Stacey Abrams, the former Georgia gubernatorial candidate, said Sunday on NBC’s “Meet the Press” and CNN’s “State of the Union” that she does not give President Trump any credit for criticizing Georgia Republican Governor Brian Kemp’s decision to reopen the state’s economy.

President Trump, however, said Thursday that he was “not happy” with Kemp’s decision to start reopening businesses in the state of Georgia, amid COVID-19.

On Friday, the Commander in Chief tweeted: “I (or @VP) never gave Governor Brian Kemp an OK on those few businesses outside of the Guidelines. FAKE NEWS! Spas, beauty salons, tattoo parlors, & barber shops should take a little slower path, but I told the Governor to do what is right for the great people of Georgia (& USA)!”

NBC’s Chuck Todd asked Stacy Abrams “if she believed any businesses are ready to reopen in the state of Georgia,” to which she replied, “I think reopening business, until we have increased our testing and decreased our infection rate, is wrong-headed.”

“You’ve called this decision by Governor Kemp a political decision. I’m just curious how you think this benefits him politically? He’s taking grief from the president. You and the president are [on] the same side on this one, when it comes to the speed of reopening Georgia. So, it doesn’t look like it’s benefiting him politically. But what’s your take on it?” Todd asked Abrams.

“I give Donald Trump zero credit for backing away from this because he incited it with his liberation of the state’s narrative. I think Brian Kemp was responding to that call and decided to wrong-headedly move forward,” she claimed. Continued Below

“And unfortunately, as a result, [Gov. Kemp] found himself crossways with the president, with Mike Pence, nodding pathetically at the same time about ingesting Clorox, as the president gave more false information to the public,” Abrams claimed, referring to the president’s “disinfectant” remarks.

Chuck Todd, however, did not correct Abrams’ “Clorox” statement. The president did not use the word “Clorox”, nor did he tell Americans to ingest “Clorox”.

“But I think all three of these men have misserved Georgia and misserved the country,” Abrams added. Video Below

"I think all three of these men have misserved Georgia and misserved the country." pic.twitter.com/6BlYmT9PZN

During her CNN interview, Abrams further said: “I give President Trump no credit. He actually caused this challenge by tweeting for weeks that we should liberate our economies.”

The president tweeted one-time about liberation on April 17th, amid the unusual lockdown restrictions in some states. “LIBERATE MINNESOTA! LIBERATE MICHIGAN! LIBERATE VIRGINIA, and save your great 2nd Amendment. It is under siege!” the President had declared on Twitter.

"This is a dangerous decision. We cannot open an economy when the people who will power that economy are at risk." @staceyabrams on Georgia Gov. Brian Kemp's decision to reopen the state's economy. #CNNSOTU pic.twitter.com/4ICMnwkiet