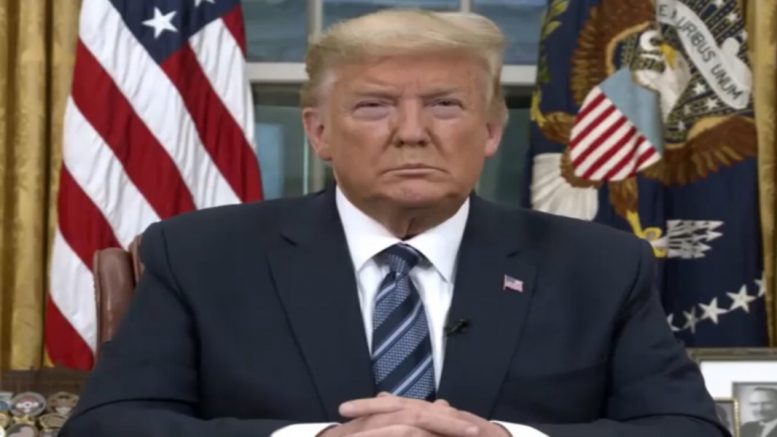 45th President Donald J. Trump issued an email statement on Tuesday from his “Save America” PAC, stating that “the insurrection took place on November 3rd” of last year and announced he will hold a news conference on January 6th.

Trump’s news conference will take place one year after he held a “Save America Rally” at Ellipse Park near the White House, telling his supporters to “peacefully and patriotically make your voices heard” ahead of the Capitol breach.

“Why isn’t the Unselect Committee of highly partisan political hacks investigating the CAUSE of the January 6th protest, which was the rigged Presidential Election of 2020?” 45th President Trump asked in an emailed statement.

“Does anybody notice that they want to stay as far away from that topic as possible, the numbers don’t work for them, or even come close. The only thing they can do is not talk about it,” he said.

Trump reiterated his stance that election fraud occurred in Pennsylvania, Arizona, Georgia, Wisconsin and Michigan and accused “Republican RINOs” in the Great Lakes State of not wanting to pursue the matter.

“Look at what is going on now in Pennsylvania, Arizona, Georgia, Wisconsin, and, to a lesser extent, Michigan where the numbers are horrendously corrupt in Detroit, but the weak Republican RINOs in the Michigan House and Senate don’t want to touch the subject,” the 45th President said. Continued Below

“In many ways a RINO is worse than a Radical Left Democrat, because you don’t know where they are coming from and you have no idea how bad they really are for our Country. The good news is there are fewer and fewer RINOs left as we elect strong Patriots who love America,” he noted.

In the same email statement, the 45th president announced plans to hold a news conference at his Mar-a-Lago home in Florida “to discuss all of these points, and more.”

“I will be having a news conference on January 6th at Mar-a-Lago to discuss all of these points, and more. Until then, remember, the insurrection took place on November 3rd, it was the completely unarmed protest of the rigged election that took place on January 6th,” he said. Continued Below 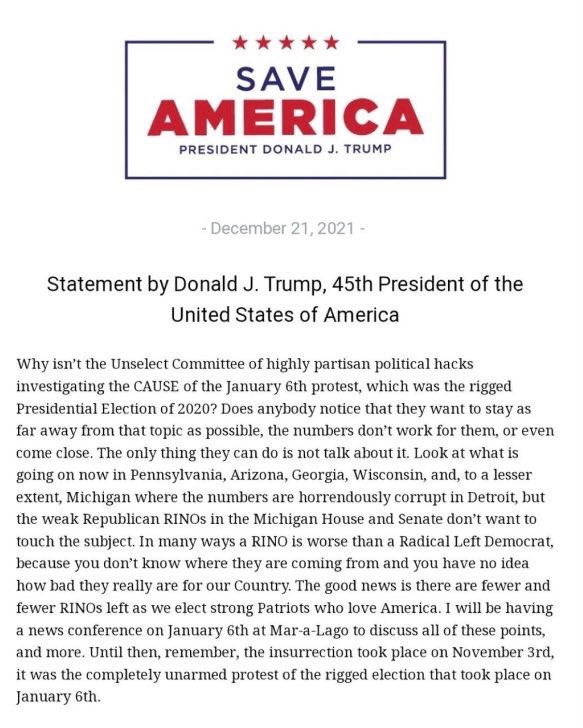 Trump telling his supporters at the “Save America Rally” to “peacefully and patriotically make your voices heard” on January 6, 2021.

"We have come to demand Congress do the right thing and only count the electors who have been lawfully slated. I know that everyone here will soon be marching over to the Capitol building to PEACEFULLY and patriotically make your voices heard."pic.twitter.com/zLPJLqyZzJ