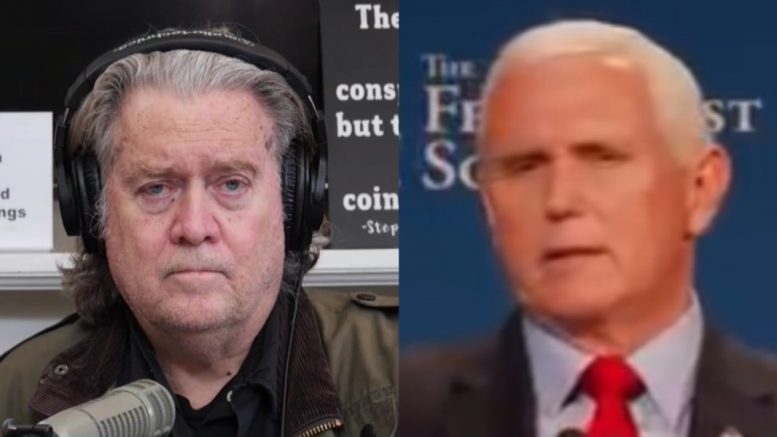 Reacting to remarks made by Mike Pence on Friday, Steve Bannon called the former vice president a “stone-cold coward” and said that he will “carry this to his grave”.

Bannon’s observation came after Pence said in a speech to the Federalist Society on Friday, “There are those in our party who believe that as the presiding officer over the joint session of Congress that I possessed unilateral authority to reject electoral college votes. And I heard this week, that President Trump said I had the right to overturn the election. President Trump is wrong. I had no right to overturn the election”.

“That’s not what president Trump said — is you had the full right to revert back to the states,” Steve Bannon explained during an airing on Saturday’s “War Room”.

“… The president pro temp sent you a letter and requested that you send it back to the state legislators so they could review the process of how they certified the Biden electors.”

“Pence, you’re gonna carry this thing, eventually to your grave. … Because it is a mark of shame, and you are a cold stone coward. A stone cold coward,” Mr. Bannon expressed.

Pence’s remarks came after Trump issued a statement last weekend, in response to efforts by a bipartisan group of Democrats and “RINO Republicans”, according to Trump, who are trying to pass legislation that would clarify the vice president’s role when it comes to certifying the results of a Presidential Election.

Related: Trump: Pence’s ‘Position Is Not An Automatic Conveyor Belt’ For ‘Old Crow Mitch McConnell’ To Push Biden Through ‘If Obvious Signs Of Voter Fraud Or Irregularities Exist’

“I Would Not Blow These Off!” Sen. Wendy Rogers Warns As AZ Senate Issues 2 New Subpoenas Over Forensic Audit