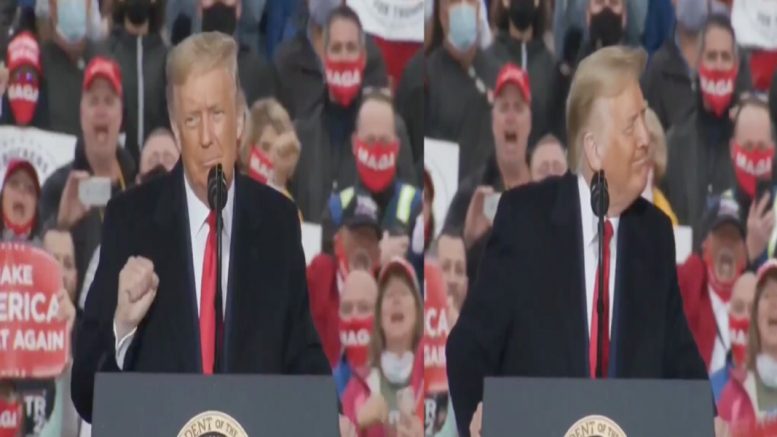 During a rally in Allentown, Pennsylvania on Monday, the crowd erupted in a “God Bless Trump!” chant after the Commander in Chief brought up two events held during the Democrat National Convention — which omitted the word “under God” during the Pledge of Allegiance.

“We will teach our children to love our country, honor our history, and always respect our great American flag,” the president said.

“And we will live by the timeless words of our national motto: ‘In God We Trust’,” President Trump told the audience.

“You know, they wanted to take the word God out of their Pledge of Allegiance, you saw that,” he continued. “And I said, ‘Oh, they must’ve made a typo’. They didn’t have ‘In God’, they didn’t have ‘God’. They took the word ‘God’ out. And then when I watched it a second time, the same thing happened. I said, ‘This is serious’. And then, our country got very angry and it was incredible how quickly God got put back into, right? It got put back. The Pledge of Allegiance…”

It appears the President was referring to the Democrat National Convention in August, where two events — the LGBTQ caucus meeting and the Muslim Delegates Assembly — “under God” was omitted when the Pledge of Allegiance was recited.

The president at the time, also pointed it out on Twitter writing: “The Democrats took the word GOD out of the Pledge of Allegiance at the Democrat National Convention. At first I thought they made a mistake, but it wasn’t. It was done on purpose. Remember Evangelical Christians, and ALL, this is where they are coming from-it’s done. Vote Nov 3!” Continued Below

(Related: After Day 1 Of The [DNC] Convention, Lifelong Dem Tells C-SPAN: “I Am Definitely Changing My Vote To Republican”)

While the president was telling the story about the two meetings during the Democrat National Convention, where they omitted “under God” during the Pledge of Allegiance, the crowd erupted in a chant of “God Bless Trump!”

The Commander in Chief expressed his gratitude to his supporters at the rally, saying, “Thank you, everybody. Thank you very much.” Video Below

Here is what President Trump was referring to:

At least two caucus meetings at the DNC intentionally dropped "under God" from the Pledge of Allegiance. pic.twitter.com/oqh5AV8skG

(Related: Pastor Jeffress On How To Defeat The ‘Attack’ On President Trump: “We Need To Vote As If The Survival Of Our Nation Depends Upon It”)