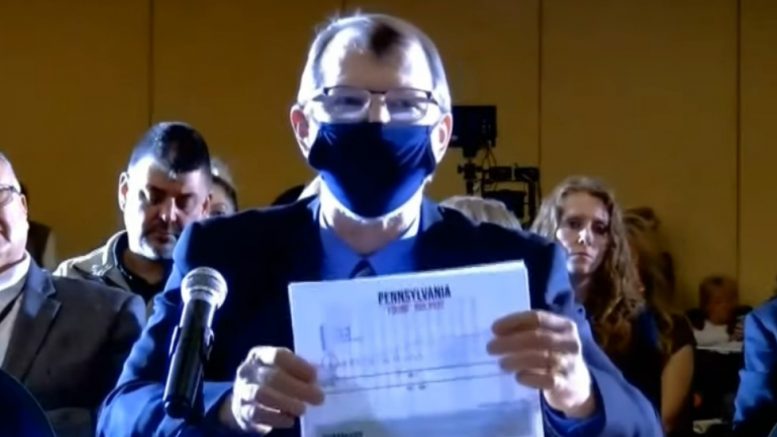 A witness at Pennsylvania’s public hearing on Wednesday had the gallery of spectators reacting in utter disbelief after revealing the significantly low number of votes President Trump received out of hundreds of thousands of ballots that yielded a tremendous spike for Biden in the hours after polls closed on November 3rd.

Colonel Phil Waldron, who is a statistical expert, testified that a red flag went up when data indicated President Trump got roughly 3,200 votes out of an estimated 570,000 votes that were dumped and recorded in close proximity to each other.

“That big spike that occurs there is a prime indicator of fraudulent voting,” Waldron told Pennsylvania’s state leaders.

“When you look at this entire curve, with all of these spikes, can you calculate how much of a vote that accounted for Biden and how much for Trump?” Giuliani asked.

“Close to 600,000 — I think our figures were about five hundred and seventy some odd thousand,” Waldron replied. “But all of those spikes represented, over time, for Biden.”

“And how much for Trump?” Giuliani asked. “I think it was lower 3,200,” Col. Waldron replied as spectators gasped and chuckled at the mind-blowing statistic. Video Below

.@RudyGiuliani: Of the 600K votes added during curious "spikes" in PA, how many went to Biden?

Witness: "I think our figures were about 570-some-odd-thousand."

"And how much for Trump?

Pastor Jeffress Targets Trump’s Opponents Who Are “Fantasizing” About Him Being Beaten Down: “They’re Gonna Be Sorely Disappointed”