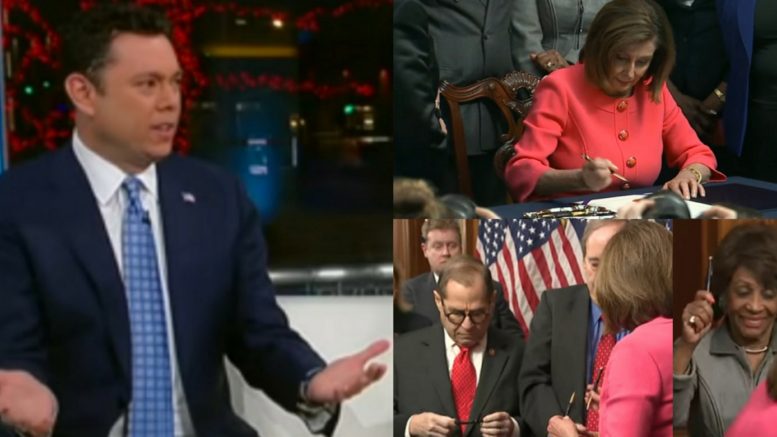 Pelosi used multiple black and gold pens with her name transcribed on them to sign off on the articles. She then passed out the pens and took photos with House Democrats who surrounded her during the event.

The ceremony contradicted Pelosi’s notion that impeachment is “solemn” and “somber,” as she and other House Democrats appeared to be celebrating moment.

While appearing on Fox and Friends, Chaffetz pointed out that Pelosi had been planning impeachment “since the very beginning” of Trump’s presidency.

“And then when she did that signing ceremony, I have never seen anything like that,” Chaffetz said. “You do that when there’s a landmark piece of legislation that passes.”

Chaffetz continued, “It’s usually something that’s reserved for the President of the United States. Every once in a while John Boehner or Paul Ryan would do something if it was a big, major — like tax reform.”

“But to do it like this, saying oh ‘it’s somber and it’s solemn and it’s prayerful and there’s nothing to be gleeful about’ — to hand out those pens, I mean, come on!” he exclaimed. Video Below

GOP Sen. Sasse Reportedly to Announce his Intent to ‘Resign’; University of Florida Selects Sasse to be its Next President