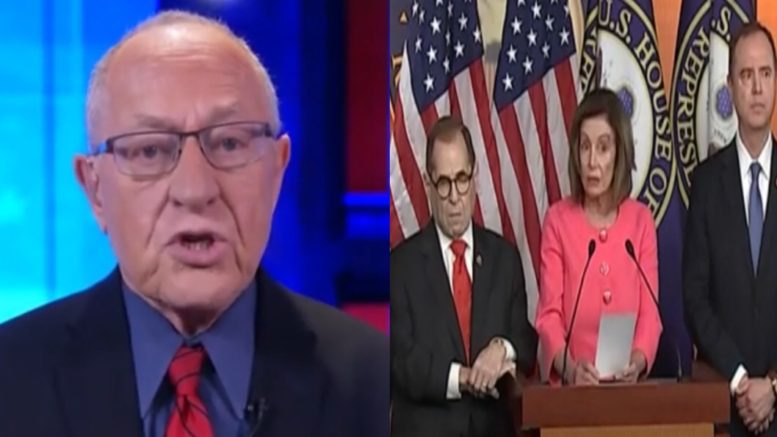 Law scholar Alan Dershowitz strongly believes the Democrat-led impeachment of President Trump is “dangerous” to the integrity of the Constitution.

On Sunday, Derschowitz, who is also a member of President Trump’s legal team for the upcoming Senate trial, explained why the impeachment of Trump is actually the “greatest nightmare” of America’s Founding Fathers.

Alan Dershowitz pointed to Democrats who voted on “abuse of power” and “obstruction of Congress”, arguing that the charges filed by Democrats are not within the criteria for impeachment within the Constitution.

“The vote was to impeach on abuse of power, which is not within the Constitution criteria for impeachment and obstruction of Congress. Those are both the kinds of things that led [Alexander] Hamilton and [James] Madison– talk about [a] nightmare, to regard that as the greatest nightmare,” Dershowitz said on ABC’s “This Week”.

Related: Pam Bondi On Dems Case Against The President: “They Have Sent Over The Flimsiest Of Flimsy Evidence”

“Number one: giving Congress too much power to allow the president to serve at the will of Congress,” Dershowitz continued. “And number two, as Hamilton put it, ‘The greatest danger is turning impeachment into a question of who has the most votes in which House, and rather than having a consenses broad view of impeachable conduct.'” Continued Below

Constitutional scholar and George Washington University law professor Jonathan Turley told lawmakers in December, during a House Judiciary impeachment inquiry hearing, that it would be an “abuse of their power” to impeach President Trump.

“I can’t emphasize this enough and I’ll say it just one more time: If you impeach a president–if you make a high crime and misdemeanor out of going to the courts; it is an abuse of power,” Turley said.

“It’s your abuse of power. You’re doing precisely what you’re criticizing the president for doing. We have a third branch that deals with conflicts at the other two branches. And what comes out of there, what you do with it, is the very definition of legitimacy,” he added. Video Below

.@GStephanopoulos: "Is it your position that President Trump should not be impeached even if all the evidence and arguments laid out by the House are accepted as fact?"

Dershowitz says "you can't charge a president with impeachable conduct" if it doesn't fit criteria in Constitution.

"I'm a liberal Democrat who voted against President Trump and who voted for Hillary Clinton. I'm here to present a constitutional argument" https://t.co/su65A8bcwG pic.twitter.com/srgJyOQ2qV

Related: Kellyanne Conway: “History Will Not Look Kindly On The Instigators & The Investigators Of This Period”