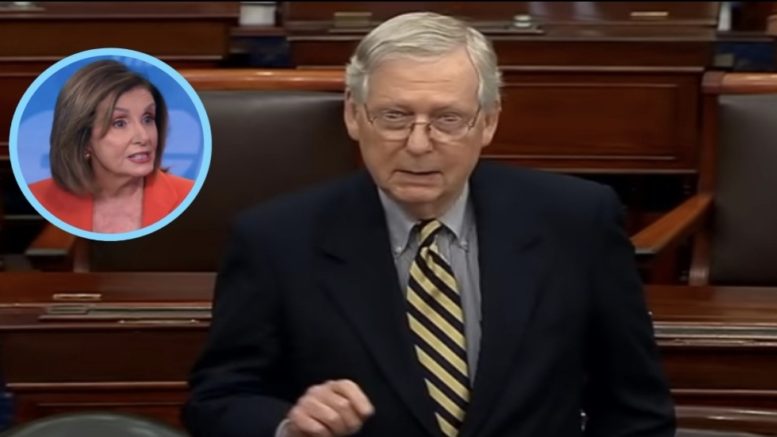 On Monday, Senate Majority Leader Mitch McConnell delivered remarks on the Senate floor in wake of House Speaker Nancy Pelosi signaling she’s on the verge of transmitting articles of impeachment after holding them for almost 4 weeks.

“It’s certainly been revealing to see House Democrats first claim that impeachment was so urgent that they could not even wait to fill out the factual record… and then subsequently delay it for weeks,” the majority leader said in his speech.

McConnell then sarcasticly applauded Pelosi for finally realizing that she “never had any ‘leverage’ to dictate Senate procedure to Senators and is giving in to bipartisan pressure to move forward.”

“In terms of influencing Senate proceedings, this strange gambit has achieved absolutely nothing,” McConnell stressed. “But it has produced one unintended side effect.”

“The Speaker’s efforts to pre-commit the Senate to carry on an investigation with which her own House lost patience concedes that the House case is rushed, weak, and incomplete,” he added.

“Let me say that again: By trying and failing to get the Senate to pre-commit to redoing the House’s investigation, House Democrats admitted that even they do not believe their own case is persuasive,” McConnell continued. “Think about the message it sends when the ‘prosecutors’ are this desperate to get the ‘judge and jury’ to re-do their own homework for them.” Video Below

McConnell then slammed the House for knowingly declining “to spend time on legal battles and due process that it would have needed to pursue certain avenues.”

“But now, after declining to fight their own fight, they want the Senate to pre-commit ourselves to wage these potentially protracted legal battles on their behalf,” McConnell proclaimed. “They wanted senators to pre-commit ourselves to not only judge the case that House Democrats are actually going to send over, but also to re-open the investigatory stage and maybe supplement Chairman Schiff’s slapdash work.”

If House Democrats were confident their own investigation was persuasive, they would not be so desperate to get the Senate to reopen it. The House has signaled they're afraid for the Senate to judge the case they will actually send us. The case they voted for. pic.twitter.com/oqhg2drPdY

Here is McConnell’s full Senate floor speech that he delivered on Monday: