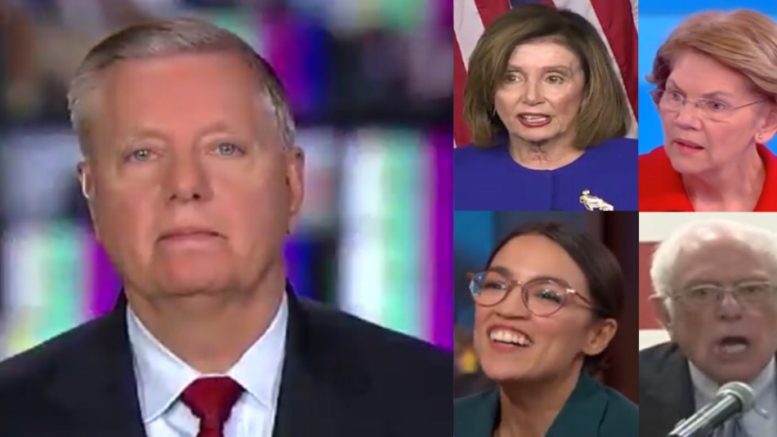 Senate Judiciary Chairman Lindsey Graham (R-SC) spoke with host Judge Jeanine on Fox News’ “Justice” Saturday where he pushed back at the House who voted on “The Wars Powers Resolution” this week, calling it “blatantly unconstitutional”.

The House of Representatives voted in favor of the War Powers Resolution, also known as the War Powers Act, on Thursday, in an attempt to limit President Trump’s military action toward Iran. The resolution passed, 224-194.

Asked if it was a meaningless resolution, Senator Lindsey Graham replied, “It’s a concurrent resolution that has no effect of law. They’re doing this emboldening the enemy. I don’t doubt their motives. … The Congress has the power to declare war. That doesn’t mean the Commander in Chief can’t use military force to protect the country without Congress.”

“What the president did is he took out [Qassem] Soleimoni, who was planning another attack against American forces in Iraq, who were lawfully present. He has all the authority he needs to protect troops in the field. This was a defensive preemptive attack,” Graham explained.

“The War Powers Act is blatantly unconstitutional. You cannot have 535 Commander in Chiefs. Can you imagine what our information would look like if Bernie Sanders, Elizabeth Warren, and Rand Paul and AOC, and you keep going down that list– that we couldn’t defend the nation unless they all agreed? That would be impossible,” the South Carolina Senator stated.

The Senate Judiciary Chair also criticized Republican Senators Rand Paul (KY) and Mike Lee (UT) for opposing the drone strike that killed the Iranian earlier this month and said they are out of their depth on the issue. (Continued Below)

“I like them both and if I had an eye problem I would call Rand Paul. He’s a great eye doctor but I would not ask him for commander in chief advice,” Senator Graham said. “Mike Lee’s a great guy. But all I can tell you is that they’re so wrong. Their foreign policy is more like Bernie Sanders — less like Ronald Reagan, less like Donald Trump. But here’s the legal question: do you think our great founders envisioned 535 commander in chiefs? One person can’t put us in a state of war.”

“A commander in chief can use force to protect the nation, without 535 people signing on to it,” Graham added. “I said this when [Barack] Obama was president. I said it when [Bill] Clinton was president. If you don’t like what the commander in chief is doing, as a member of Congress, cut off funding. We have the power of the purse, but we cannot make military decisions.” (Video Below)

"The War Powers Act is blatantly unconstitutional. You cannot have 535 Commander-in-Chiefs."- @LindseyGrahamSC pic.twitter.com/Kmg7O6mAbf

(Related: Bongino To Dems Who Are Riled Over Soleimani’s Death: “You Get The Double-Barrell Middle Finger From Me”)