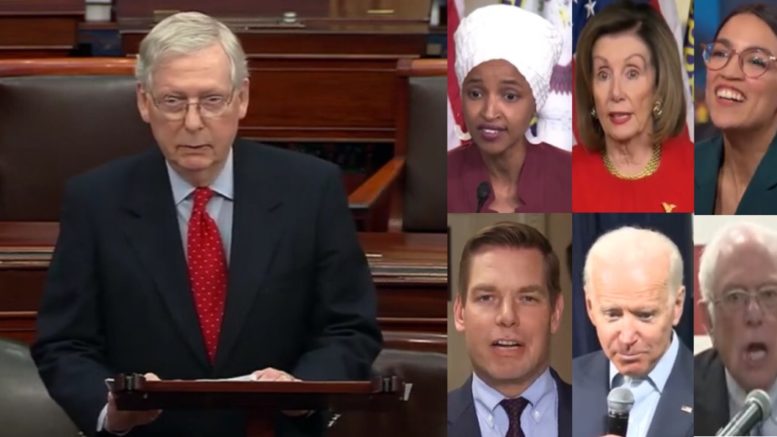 “Last Thursday the United States took decisive to end the murderers scheming of Iran’s chief terrorist. Qassem Soleimani had spent numerous years masterminding attacks on American service members and our partners throughout the middle east and expanding Iran’s influence. Despite sanctions, despite prohibitions by the U.N. security council, he roamed throughout the region with impunity,” Senator McConnell said.

“His hands bore the blood of more American service members than anyone else alive. Hundreds of American families had buried loved ones because of him. Veterans learned to live with permanent injuries inflicted by his terrorists. And in Iraq, and in Syria, and beyond, the entire region felt the effects of his evil tactics,” Senator McConnell said Monday.

“We should welcome his death and its complication of Terahn’s terrorism industrial complex. But, we must remain vigilant and soberly prepare for even further aggression,” McConnell continued.

He noted that the President’s decision to eliminate Soleimoni has generated questions from lawmakers adding, “We can and we should learn more about the intelligence and thinking that led to this operation. And the plan to defend American personal interests in the wake of it,” he said.

Senator McConnell said that lawmakers will be briefed on Wednesday, adding, “Unfortunately in this toxic political environment, some of our colleagues rushed to blame our own government before even knowing the facts– rushed to split hairs about intelligence before being briefed on it, and rushed to downplay Soleimoni’s evil while presenting our own president as the villain.” (Continued Below)

“Soon after the news broke, one of our distinguished colleagues made a public statement that rightly called Soleimoni a murderer and then, amazingly walked that message back when the far-left objected to the factual statement. Since then, I believe all her criticism is directed at our own president,” McConnell said.

“Another one of our Democratic colleagues has been thinking out loud about Middle East policy on social media,” he continued. “Mirror days before President Trump’s decision, this Senator tore into the White House for what he described as weakness and inaction. No one fears us, he complained. Trump has rendered America impendent in the Middle East.”

“But since the strike, a complete 180. That same Senator harshly criticized our own president for getting tough. Ludicrously he and others on the left have accused the administration of committing an illegal act and equated the removal of this terrorist leader with a foreign power assassination of our own secretary of defense,” the Kentucky Senator stated. (Continued Below)

Senator McConnell was referring to Senator Chris Murphy (D-CT) who tweeted: “Soleimani was an enemy of the United States. That’s not a question. The question is this – as reports suggest, did America just assassinate, without any congressional authorization, the second most powerful person in Iran, knowingly setting off a potential massive regional war?”

“Look, the Senate is supposed to be the chamber where overheated partisan passions give way to sober judgment. Can we not at least wait until we know the facts? Can we not maintain a shred, just a shred of national unity for 5 minutes– for 5 minutes before deepening the partisan trenches? Must Democrats distaste for this president dominate every thought that they express and every decision they make? Is that really the seriousness that this situation deserves?” he asked. [Emphasis added].

“I would urge my colleagues to bring full awareness of the facts, mindfulness of the long history of Iran’s aggression toward the United States and its allies and a sober understanding of the threat Iran continues to pose. Could we at least remember we’re all Americans first and we’re all in this together?” the Senate Majority Leader wondered. (Video Below)

Trump Vows to ‘Build a State-of-the-Art, Next Generation Missile Defense Shield’ When he’s ‘Commander in Chief’