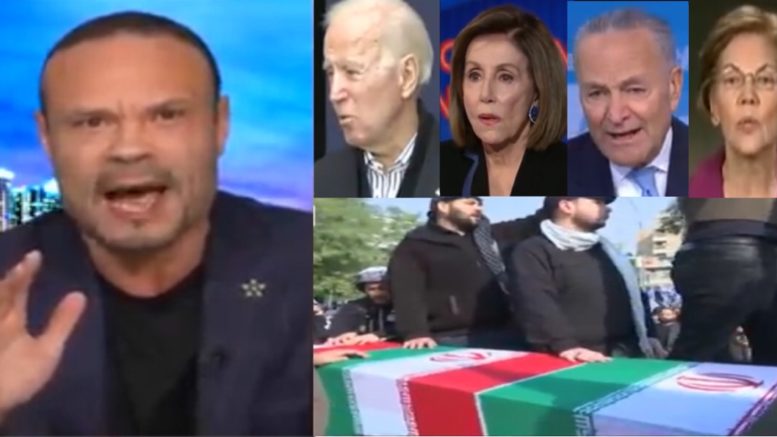 “The Democrats and the some in the media, the reaction to the killing of this savage, one of the most dangerous men in the world has been an abomination. I mean it makes you seriously ask the question: what team are you on?” Bongino asked. “How is this not an unabashedly good thing for the security of the entire world?”

“You have to remember, it’s not just American blood this savage was bathed in, it’s regional blood as well,” he continued. “Whether it was Libya, Afghanistan, Yemen, Seria, Bahrein, Iraq– this was a force for instability and insecurity around the entire world. And just to be clear on this, you don’t think anybody here speaking with forked tongue, I don’t remember after Barack Obama ordered the killing, thankfully Osama Bin Laden, which was a successful operation for the United States and the world, I don’t remember any of this talk, ‘Well, was Bin Laden an imminent threat? Well, did we really need to… did we dangerously escalate the situation?'”

“You know who dangerously escalated the situation? This Iranian savage we just killed when he decided it was a good idea to attack our embassy. Where were the Democrats lecturing Soleimoni and the Iranians then? The answer is they weren’t. They were celebrating Obama paying them off with a billion dollars in cash that they still to continue to claim was Iranian money. It wasn’t Iranian money. It was the Shaz (sp) money,” Bongino said.

Additionally, the House will vote on a war powers resolution this week, Speaker Nancy Pelosi (D-CA) told House Democrats Sunday. Pelosi said in a letter that, “The House will introduce and vote on a War Powers Resolution” in order “to limit the President’s military actions regarding Iran.”

Bongino responded to the Democratic leaders saying that he doesn’t remember them doing that with [Anwar] al-Awlaki or the Obama drone strikes. “Do you remember the Democrats pushing for that?” he asked. “Of course you didn’t because they’re phony, fake, fraud, hypocrites who, I’m telling you, you should be asking yourself today a very serious question. I’m not kidding. What team are these guys on?” he questioned again.

“We have seen them defend MS-13,” he continued and pointed out Nancy Pelosi who was offended when President Trump called them animals. “Nah, I think when your motto is rape, torture, kill, you can pretty much call people animals. It’s actually a disgrace to animals to call them animals. But that’s not where Pelosi was going with that. Remember with the Kim Jong Un meets we had? It appears they were rooting for Kim Jong Un. I mean, what team are these guys on?” (Video Below)

“Do you think this is really gonna get you re-elected– that mainstream America wants to hear you defending one of the world’s most dangerous people after we took him out?” Bongino asked.

“We have 600 dead American servicemen buried underground, whose families lost and died heroicly because of this savage. .. We already had an attack on our Embassy, that if it was quailed by brave U.S. patriots in our military, could’ve resulted in another Benghazi-like situation. … If [Democrats] go down this road blaming everything now on President Trump, it will be just another disturbing, gross episode in the history of a now broken Democrat party on foreign policy,” he added.

(Related: Kellyanne Conway: “I’m Not Gonna Be Lectured By People Who Voted… To Fork Over $130 Billion Dollars In Cash To Iran”

Trump on 2020 Election: ‘Massive Evidence in Swing States, Available Upon Request (With Much More to Come)’