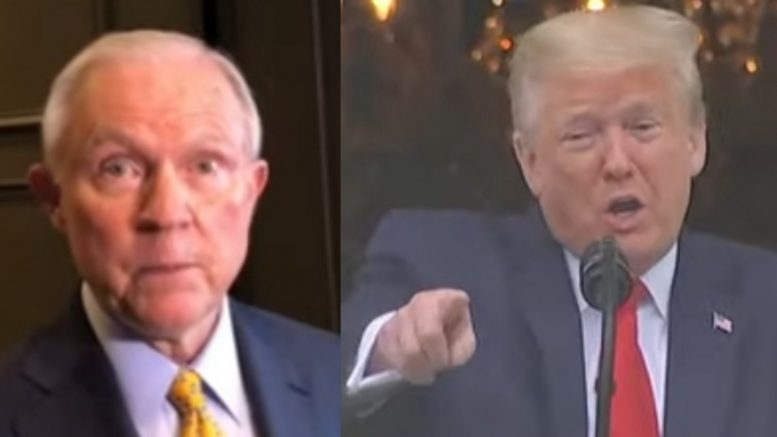 Former Senator and Attorney General Jeff Sessions tried to persuade President Trump and “conservatives across the country” that he can be “trusted.”

The remarks by Sessions came as he is trying to gain support before Alabama’s runoff primary against former football coach Tommy Tuberville for Senate.

Related Article: Jeff Sessions Slams Democrats Over Their Impeachment Inquiry: “It’s An Abuse Of The Process”

President Trump, who officially endorsed coach Tuberville back in March, warned Alabama’s electorate on Friday that Sessions can not be trusted, citing the former AG recusing himself, which he believes led to the two-year “witch hunt” after Robert Mueller was appointed to Special Counsel.

“3 years ago, after Jeff Sessions recused himself, the Fraudulent Mueller Scam began,” Trump tweeted. “Alabama, do not trust Jeff Sessions. He let our Country down. That’s why I endorsed Coach Tommy Tuberville (@TTuberville), the true supporter of our #MAGA agenda!”

After learning of Trump’s statement, Sessions attempted to hold his ground and defended himself against the President with multiple tweets. See Below

“Look, I know your anger, but recusal was required by law,” Sessions replied to Trump. “I did my duty & you’re damn fortunate I did. It protected the rule of law & resulted in your exoneration. Your personal feelings don’t dictate who Alabama picks as their senator, the people of Alabama do.”

He continued, “Tuberville’s a coward who is rightly too afraid to debate me. He says you’re wrong on China & trade. He wants to bring in even more foreign workers to take American jobs. That’s not your agenda and it’s not mine or Alabama’s. I know Alabama. Tuberville doesn’t.”

“Mr. President, Alabama can and does trust me, as do conservatives across the country. Perhaps you’ve forgotten. They trusted me when I stepped out and put that trust on the line for you,” Sessions declared. See Below

“Jeff, you had your chance & you blew it,” Trump responded. “Recused yourself ON DAY ONE (you never told me of a problem), and ran for the hills. You had no courage, & ruined many lives. The dirty cops, & others, got caught by better & stronger people than you. Hopefully this slime will pay a big price.”

“You should drop out of the race & pray that super liberal @DougJones, a weak & pathetic puppet for Crazy Nancy Pelosi & Cryin’ Chuck Schumer, gets beaten badly,” he added. “He voted for impeachment based on “ZERO”. Disgraced Alabama. Coach @TTuberville will be a GREAT Senator!”

Trump Fires Back At Sessions

Sessions eventually responded to President Trump, when he said, “I will never apologize for following the law and serving faithfully and with honor. Neither of us knew about the phony investigation into our campaign until after I was sworn in. As you will recall, I recommended firing @Comey from the very beginning.”

“You and I fight for the same agenda. @TTuberville is so weak he won’t debate me & too weak for Alabama. AL will vote for you this fall, but Alabama will not take orders from Washington on who to send to the Senate,” he concluded.

You and I fight for the same agenda. @TTuberville is so weak he won’t debate me & too weak for Alabama. AL will vote for you this fall, but Alabama will not take orders from Washington on who to send to the Senate. @realDonaldTrump