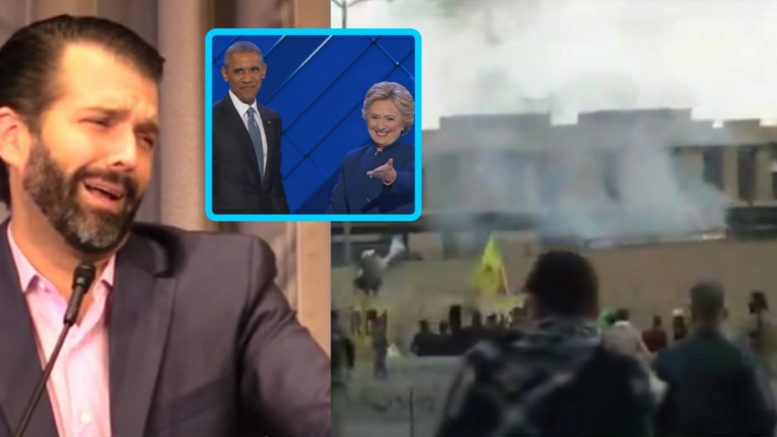 On Wednesday morning, Donald Trump Jr. praised America’s response to Shiite militia-men and their supporters breaking in to the U.S. Embassy compound in Badghdad, Iraq.

The breach followed U.S. airstrikes on Sunday that killed 25 fighters of the Iran-backed militia in Iraq, the Kataeb Hezbollah. The U.S. military said the strikes were in retaliation for last week’s killing of an American contractor in a rocket attack on an Iraqi military base that the U.S. blamed on the militia, as per Fox News.

President Trump blamed Iran for the embassy breach in which dozens of Iraqi Shiite militiamen and their supporters broke into the U.S. Embassy, smashing a main door and setting fire to a reception area in one of the worst attacks on the embassy in recent years, reported Fox News.

“The Anti-Benghazi!” President Trump declared on Twitter after it was reported that 100 Marines had been sent to the embassy.  A U.S. Apache helicopter gunship also flew over the embassy and dropped flares in a “show of force,” attempting to disperse the crowd.

In his reaction to how the situation in Iraq is being handled, Donald Trump Jr. commended leadership by his father’s administration and compared it to the Obama Administration’s (lack of) response to the deadly Benghazi attack.

“It’s nice to wake up in a country who once again leads like they should. When our embassy’s is under attack & they ask for help they actually get it… Immediately!” Don Jr. said.

“Yesterday’s action vs the disgraceful response at Benghazi is all you need to know about leadership then & now!” he added. Videos Below

It’s nice to wake up in a country who once again leads like they should. When our embassy’s is under attack & they ask for help they actually get it… Immediately!

Yesterday’s action vs the disgraceful response at Benghazi is all you need to know about leadership then & now!

Moments later in another tweet, Trump Jr. targeted the media’s reaction to the embassy attack:

It’s a sad day when you can hear it in the media’s voice how upset they are that the Iraq embassy attack hasn’t turned into a disaster like Benghazi because this administration had the guts to actually take action & defend Americans. At least we know whose side they’re on!

In ending, here are some videos showing U.S. military taking action both inside and outside the embassy compound to intimidate the crowds surrounding it.

VIDEO: AH-64 Apaches protect @USEmbBaghdad. 🚁“We have taken appropriate force protection actions to ensure the safety of American citizens…and to ensure our right of self-defense. We are sending additional forces to support our personnel at the Embassy.”~@EsperDoD 🇺🇸🇮🇶 pic.twitter.com/amABHBAOcL

Look how tough this mob of Iranian-backed terrorists are when US Marines start firing back.

(Infuriating watching this video thinking of the lives that could have been saved had our leaders cared about Americans in Benghazi. Thank you @realDonaldTrump)https://t.co/BzJPDWAOO3