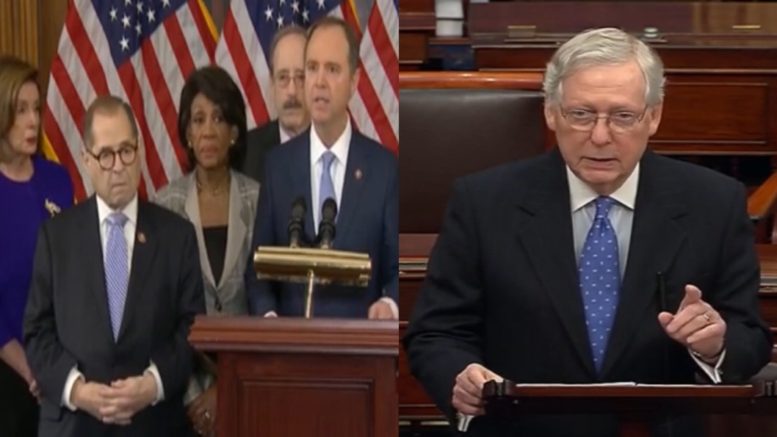 After the House passed their two articles of impeachment, however, House Speaker Nancy Pelosi (D-CA) suggested at a press conference that she may delay sending the articles to the Senate.

“We can’t name managers until we see what the process is on the Senate side and I would hope that would be soon. So far, we haven’t seen anything that looks fair to us,” Pelosi told reporters.

Senator Mitch McConnell slammed Democrats for rushing through impeachment and suggested they may be too afraid to transmit their work product to the Senate.

‘This is by far the thinnest basis for any House-passed presidential impeachment in American history… The prosecutors are getting cold feet in front of the entire country and second-guessing whether they even want to go to trial… It will be an unprecedented constitutional crisis if the Senate agrees to set the bar this low forever.’ — Senator Mitch McConnell.

Senator McConnell stated: “Before the articles even passed, the Senate Democratic Leader went on television to demand that this body re-do House Democrats’ homework for them–that the Senate should supplement Chairman Schiff’s sloppy work so it is more persuasive than Chairman Schiff himself bothered to make it. Of course, every such demand simply confirms that House Democrats have rushed forward with a case that is much too weak.”

“Back in June, Speaker Pelosi promised the House would, ‘build an ironclad case.’ Never mind that she was basically promising impeachment months before the Ukraine events, but that’s a separate matter. She promised ‘an ironclad case’, the Senate Majority leader said. (Continued Below)

“And in March, Speaker Pelosi said this: ‘Impeachment is so divisive to the country that unless there’s something so compelling and overwhelming and bipartisan, I don’t think we should go down that path, because it divides the country,'” Senator McConnell noted.

“By the Speaker’s own standards, she has failed the country. This case is not compelling, not overwhelming, and as a result, not bipartisan,” he said, as no Republicans voted to impeach President Donald Trump. “This failure was made clear to everyone earlier this week when Senator Schumer began searching for ways the Senate could step out of our proper role and try to fix House Democrats’ failures for them.”

“And it was made even more clear last night when Speaker Pelosi suggested that House Democrats may be too afraid to even transmit their work product to the Senate. The prosecutors are getting cold feet in front of the entire country and second-guessing whether they even want to go to trial. They said impeachment was so urgent that it could not even wait for due process but now they’re content to sit on their hands. It is comical,” Senator McConnell expressed. (Continued Below)

“Democrats’ own actions concede that their allegations are unproven. But the articles aren’t just unproven. They’re also constitutionally incoherent. Frankly, if either of these articles is blessed by the Senate, we could easily see the impeachment of every future president of either party,” he said.

“Let me say that again: If the Senate blesses this historically low bar, we will invite the impeachment of every future president,” Senator McConnell stressed.

“The House Democrats’ allegations, as presented, are incompatible with our constitutional order. They are unlike anything that has ever been seen in 230 years of this Republic. House Democrats want to create new rules for this President because they feel uniquely enraged. But long after the partisan fever of this moment has broken, the institutional damage will remain. I’ve described the threat to the presidency. But this also imperils the Senate itself,” he explained.

“The House has created an unfair, unfinished product that looks nothing like any impeachment inquiry in American history. And if the Speaker ever gets her house in order, that mess will be dumped on the Senate’s lap. If the Senate blesses this slapdash impeachment — if we say that from now on, this is enough, then we will invite an endless parade of impeachment trials,” Senator McConnell said. (Continued Below)

In concluding his statement on the floor, Senator McConnell noted this is an assignment for the Senate. “This is as grave an assignment as the Constitution gives to any branch of government, and the framers knew only the Senate could handle it. Well, the moment the framers feared has arrived,” he stated.

“A political faction in the lower chamber have succumbed to partisan rage. They have fulfilled Hamilton’s prophesy that impeachment will, ‘connect itself with the pre-existing factions, enlist all their animosities… [and] there will always be the greatest danger that the decision will be regulated more by the comparative strength of parties, than by the real demonstrations of innocence or guilt,” Senator McConnell said.

“That is what happened in the House last night. The vote did not reflect what had been proven. It only reflects how they feel about the President. The Senate must put this right. We must rise to the occasion. There is only one outcome that is suited to the paucity of evidence, the failed inquiry, the slapdash case,” he continued.

“Only one outcome suited to the fact that the accusations themselves are constitutionally incoherent. Only one outcome that will preserve core precedents rather than smash them into bits in a fit of partisan rage because one party still cannot accept the American people’s choice in 2016. It could not be clearer which outcome would serve the stabilizing, institution-preserving, fever-breaking role for which the United States Senate was created… and which outcome would betray it,” Senator McConnell added. (Video Below)

“The Senate’s duty is clear. … When the time comes, we must fulfill it,” the Senate Majority Leader concluded.