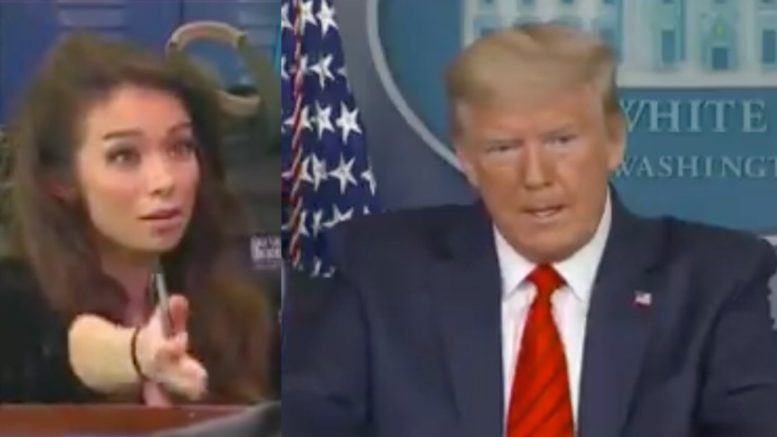 During the briefing, President Donald Trump took questions from reporters and was asked about leftwing media outlets who appear to be “siding with China” and “state propaganda”, according to OAN’s Chief White House correspondent.

Chief White House correspondent for OAN, Chanel Rion, asked the president: “Do you consider the term ‘Chinese food’ racist? Because it’s food that originates from China.”

The president responded: “No, I don’t think it’s racist at all.”

Rion continued: “On that note, major left-wing news media, even in this room, have teamed up with Chinese communist party narratives and they’re claiming you’re a racist for making these claims about the Chinese virus. Is it alarming that major media players, just because they oppose you, are consistently siding with foreign propaganda, Islamic radicals, and Latin gangs and cartels? I mean, we work right here at the White House and have direct access to you and your team.”

“Because you see, I know the truth. … They use different slogans and different concepts for me almost every week trying to catch something. Last week it was all chaos. You see me, there’s no chaos. I’m the one telling everyone to be calm. There’s no chaos in the White House. We have unbelievable professionals,” the president said.

He continued: “It’s really– I came up with the term, I hope I came up with the term. It is fake news. It’s more than fake news, it’s corrupt news. They write stories without calling anybody. … They never call me ever, that I know of, at least nobody tells me. They’ll write a story about me without even asking my opinion on something. It’s totally fake.”

The Commander in Chief pointed out that California Governor Gavin Newsom and New York Governor Andrew Cuomo have both been “very generous” to the president. “They’re saying we’re doing a great job and everybody is saying– then you read this fake, phony story in the Wall Street Journal or The Washington Post is going wild lately. I don’t know what happened to them. … These are very dishonest media sources. They’re very dishonest,” he said. (Continued Below)

“And hopefully someday in five years, I won’t be here and that will be fine. I will have done, I think, a great job. [Be]cause I don’t think anyone’s done as much in three and a half years as I’ve done and the administration. This administration has done a great job. But the press is very dishonest,” the president added.

“Well, I think they do. I mean, they’re siding with China. They are doing things that they shouldn’t be doing. They’re siding with many others, China is the least of it. So why they’re doing this, you’ll have to ask them. But if we had an honest media in this country, our country would be an even greater place,” President Trump expressed. (Video Below)

President Trump blasts the Mainstream Media: "They are siding with China" pic.twitter.com/hUPtIH2A6m

After Chanel Rion asked the president questions on Thursday, she received a note from an anonymous person at the White House.

The note read: “Do you think your question was helpful in halting the spread of the coronavirus?”, to which Rion left a note back to the anonymous person.

Meanwhile, a staff photographer at The Washington Post, Jabin Botsford, posted: “Close up of President @realDonaldTrump notes is seen where he crossed out ‘Corona’ and replaced it with ‘Chinese’ Virus as he speaks with his coronavirus task force today at the White House. #trump #trumpnotes”.

(Related: NBC Reporter Asks ‘Why Was The U.S. Not Prepared For More Testing?’ Trump Reacts: “Your Network… Called Me A Racist”

Dr. Carson On Sunday’s ‘National Day Of Prayer’: “There’s Nothing Wrong With Godly Principles, No Matter What Your Faith Is”