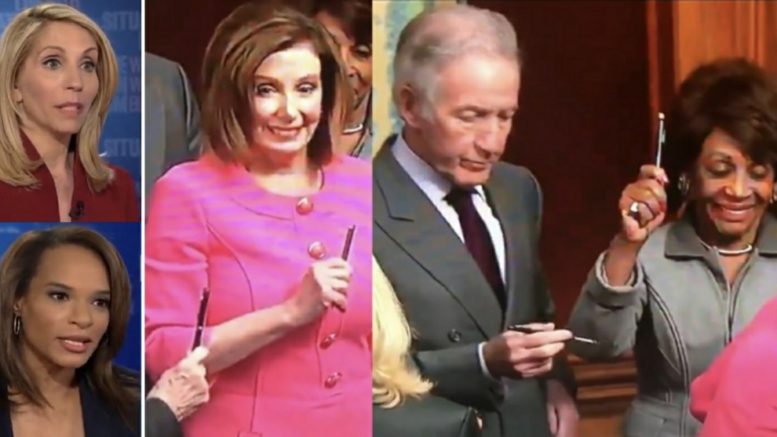 House Speaker Nancy Pelosi signed the articles of impeachment in peculiar fashion on Wednesday as she used multiple pens to complete the task. She then passed out the pens to various House Democrats who surrounded her, in what appeared to be a celebration.

The “signing ceremony” contradicted Pelosi’s notion that impeachment is “solemn” and “somber,” as pointed out by CNN panelists who were baffled by the entire situation.

Political correspondent Dana Bash questioned if it was appropriate for Pelosi and Democrats to celebrate the same way they would have if a “landmark piece of legislation” was passed.

“We are used to seeing signing ceremonies –handing out pens — at moments of celebration,” Dana Bash said.

She continued, “It was unusual to see that kind of ceremony and making, you know, handing out the pens and smiling for a picture in this kind of situation where the House Speaker has bent over backwards to say publicly and privately, ‘This is somber. This is not a time for a celebration.'”

“Understandable — this is history and the people who are involved want to take a mark the moment, but I didn’t expect to see that,” Bash concluded. Video Below

Related Article: Senate Republicans Troll House Dems On The Eve Before Pelosi Hands Over The Articles: “Now…It’s Our Turn”

Another CNN panelist agreed with Bash and followed up by calling the impeachment celebration “a little jarring” and “off message.”

She cited Pelosi saying earlier that it is a “sad and tragic day,” but at the same time “there she is holding up the pen and having photographs taken with those pens.” Video Below

CNN's Wolf Blitzer: "They'll have those pens for the rest of their lives"

But a lot of them won't have their seats in Congress much longer!

31 Dems in Trump-won districts: "I came to Congress and all I got was this lousy Pelosi pen"pic.twitter.com/zG4mcfdyKY

In ending, we leave you with some more reactions to Democrats’ impeachment signing ceremony:

This doesn’t look very “somber” and “prayerful” to me

They claim it's a somber, serious occasion they're heartbroken over… and then they pass out impeachment-signing pens with special cases. Folks. You can't make it up. https://t.co/jl9VKD8cUc

Nancy Pelosi’s souvenir pens served up on silver platters to sign the sham articles of impeachment…She was so somber as she gave them away to people like prizes. https://t.co/RMOiNeoMu0

So much for “somber” and “solemn.”

House Dems are so excited about impeachment that they’re passing out commemorative pens and grinning for photos at a celebration ceremony.

Trump Fires Back After Former AG Barr Calls Election Fraud Claims ‘BS’: “A Disappointment in Every Sense of the Word”