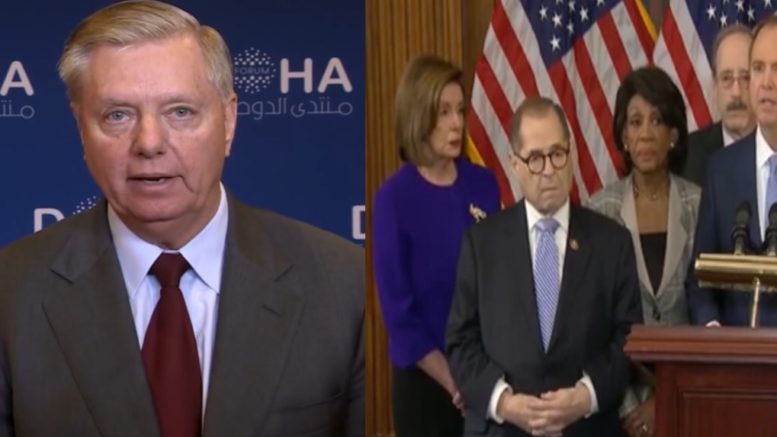 Senate Judiciary Chairman, Lindsey Graham (R-SC) spoke with host Margaret Brennan on CBS’ “Face The Nation” Sunday ahead of the expected vote in the House over articles of impeachment against the President this week.

If the Democratic-led House votes to impeach President Trump and the articles move to the Senate, Senator Graham said what he thinks is best for the country is to “get this thing over with”.

Asked if he is taking marching orders from the President, Senator Graham responded, “I am clearly– made up my mind. I’m not trying to hide the fact that I have disdain for the accusations in the process.”

Margaret Brennan pointed out that President Trump wants witnesses called forward to make his case and asked why the South Carolina Senator is opposed.

“I’d tell the President if somebody’s ready to acquit you, I’d sort of get out the way. You start calling the witnesses the President wants, then they’re gonna start calling Mike Pence, the Secretary of State Pompeo– I don’t think that’s good for the country and I don’t think it’s good for the Senate. You need 51 votes to get a witness approved. I want to make my decision based on the trial record established in the House as a basis for impeachment,” Graham explained. (Continued Below)

Senator Graham said that this is the first impeachment trial that is “being driven by partisan politicians conducted behind closed doors”, adding testimony was “selectively leaked”, and the President was “denied the ability to participate meaningfully in the House hearing”.

“I want to end it. I have nothing but disdain for this,” he expressed. “I’m trying to make myself clear. What you’re doing in the House is bad for the presidency. You’re impeaching the President of the United States in a matter of weeks, not months. You had a two-year investigation that wasn’t enough.”

“I think this whole thing is a croak. You’re shutting the President out. The process in the House– any partisan group could do this in the future. You’re weaponizing impeachment and I want to end it. I don’t want to legitimize it. I hate what they’re doing,” Graham declared. (Continued Below)

Asked if he will call Rudy Giuliani to the Senate to testify, Graham replied, “Rudy if you want to come and tell us what you found, I’d be glad to talk to you. When it comes to impeachment, I want to base my decision on the record assembled in the House. We can look at what Rudys got and Joe Biden and Hunter Biden and anything else you want to look at after impeachment.”

Last month, Former Vice President Joe Biden told CNN host Don Lemon, in an interview that he is “embarrassed for” and “angered” at Sen. Graham for launching an investigation into his prior dealings with Ukraine while in the Obama White House, adding that Graham is “going to go down in a way I think he is going to regret his whole life”.

Graham responded to say that “Joe Biden is a friend, he’s one of the most decent people I’ve ever met in my life. But here’s the deal: this whole process around the Ukraine reaks with politics. They’ve done everything but take a wrecking ball to Donald Trump and his family. We’re not gonna live in a world where only Republicans get looked at.”

“As much as I love Joe Biden, and I’m sincere when I say that, now that you want to talk about Ukraine, it’s pretty hard for me to go home and tell my constituents to ignore the fact that Hunter Biden received $50K a month from a gas company in the Ukraine, run by the most corrupt person in the Ukraine and two months after the gas company was investigated, the prosecutor got fired. I don’t know if there’s anything to this; I hope not,” he said. (Video Below)

“I hope I can look at the transcripts of the phone call between Biden and the Ukraine after the investigation began and say there’s no there there. These are legitimate concerns about what happened in the Ukraine. I love Joe Biden, but none of us are above scrutiny. I’d like to knock all this off and get back on governing the country,” Senator Graham added.

(Related: Sen Graham: Schiff ‘May Be The Most Valuable Player For The Republican Party In The 2020 Election Cycle’)

McCarthy Breaks His Silence On Rep. Stanton’s Vote By Boat: “Any Politician Who Doesn’t Show Up For Work Should Take A Pay Cut”