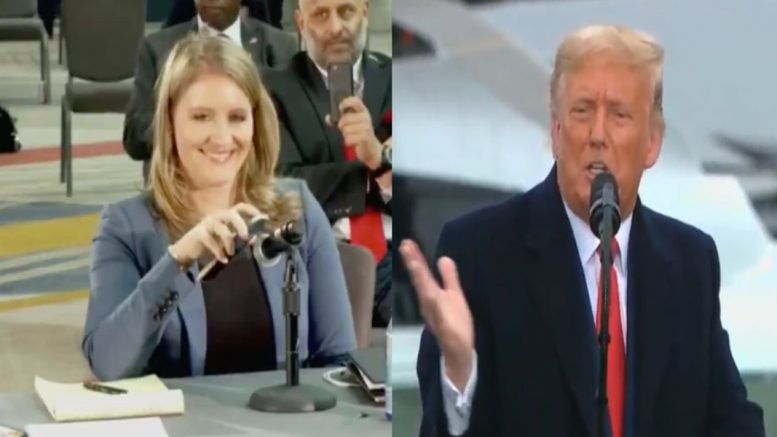 Arizona officials certified the state’s election results Monday, awarding Joe Biden the state’s 11 electoral votes as the president’s attorneys were holding a hearing in Phoenix with GOP  legislatures and witnesses, who testified over what they witnessed during the election.

As the hearing in Arizona was in session, the Commander in Chief phoned in, and the president’s attorney Jenna Ellis, held the phone up to the microphone to let everyone in the room hear what the President Trump had to say.

“Thank you very much. I’ve been watching the hearings and they’re fascinating, incredible on doing doing this thing,” President Donald Trump began to say before the members in the room cheered and applauded. “And I know some get hate, but I will tell you many more get praise from the American public. We got 74 million votes, 11 million more votes than we had in 2016.”

The president believes “we won Arizona, and we won Michigan, and we won Georgia, and we won Pennsylvania, we won Wisconsin”, adding, “But what they did is play games and games that nobodies ever seen before. This is the first time Republicans or anyone has fought back. The 2020 election was rigged, it was a scam and the whole world is watching and they’re laughing at our country. They’re laughing at us”.

“They know who won and we won by a lot,” President Trump expressed.

The Commander in Chief went on to name some of the reported allegations regarding what poll watchers witnessed during the November 3 election. “This shows you how arrogant the Democrats and others were in taking away, stealing an election, [be]cause that’s what they’re trying to do is steal it,” he asserted. Continued Below

“And the easy route for me, everyone is saying, ‘Oh, just focus on 2024, sir, focus on 2024’. I said, ‘No.’ I have to focus on two weeks ago, because this is the greatest scam ever perpetuated upon our country. This is the big one, and we went through plenty. We went through the phony Russia, Russia, Russia, the phony impeachment, and all of the different things,” President Trump explained.

The Commander in Chief switched gears and remarked over Governor Doug Ducey certifying the state’s election results, which prompted the members in room to boo. “You have a governor named Ducey … who rushed, couldn’t have gone faster. He just rushed to sign certificates so that [Mark] Kelly gets into the Senate as soon as possible. What’s that all about?” Trump wondered.

“He didn’t have to sign it. I say why would he sign when you have these incredible hearings going on that’s showing such corruption and such horrible fraud on the American people and the people of Arizona. So you’ll have to figure what that’s all about with Ducey. He couldn’t go fast enough,” Trump said. Video Below

“We’re gonna win this thing, we’re not giving up ever! We’ll never give up. There’s never been anything like this,” the Commander in Chief expressed, prompting the room to cheer. “We are going to fight, we’re taking it up all the way. We have additional cases being filed.”

“Arizona will not forget what Ducey just did. We’re not going to forget the people of Arizona. We had some of the greatest rallies we ever had. I left those rallies, a lot of you were probably there and I said, ‘There’s no way we’re gonna lose this state'”, he continued, lighting up the room again. “And we didn’t lose the state. … We won it by a lot.”

The president said the Republican legislatures are becoming a “legend” as the country watches, noting though, that he “represents everybody”. Then he thanked “all of the political representatives and the incredible witnesses for showing bravery and love of your country”, along with Rudy Giuliani, saying, “This is the most important thing you’ve ever done”.

(Related: Giuliani To AZ Legislature: “Your Political Career Is Worth Losing If You Can Save The Right To Vote In America”)