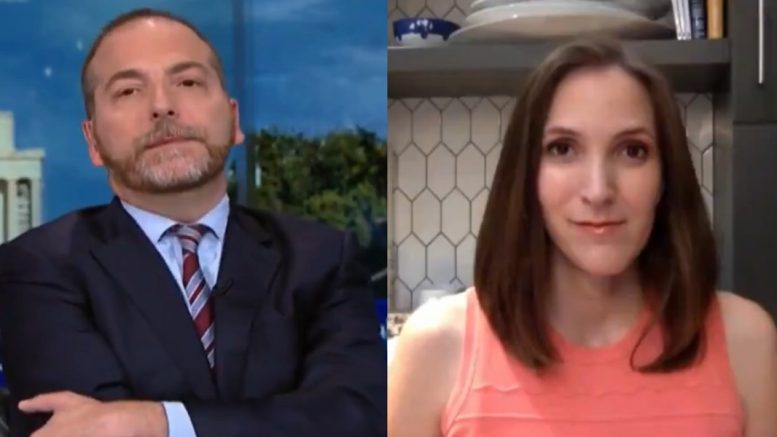 Politico’s national correspondent Betsy Woodruff Swan told moderator Chuck Todd, during an airing of NBC’s “Meet the Press”, that two Democratic members of Congress have revealed to her “nobody gives a bleep about January 6.”

A recent NBC poll shows a dwindling number of Americans blaming Trump for the attack on the Capitol; 45 percent now say he is “solely” or “mainly” responsible, down from 52 percent the month Joe Biden took office. Moreover, 55 percent say he is “only somewhat” or “not really” to blame for the riots, up from 47 percent in January 2021.

“Does the January 6th hearing break through at all?” Chuck Todd asked Betsy Swan.

“I don’t think it does. I’ve talked to two separate Democratic members of Congress in the last couple of weeks about January 6th, obviously can’t say who. And both of them have said offhandedly, ‘Nobody gives a bleep about January 6th’ when they’re talking about their districts and the way elections play out,” Swan responded.

“The reality is, obviously, it’s a very important issue. … It is also true at the same time, and not at all contradictory, it’s not a talk-to-your-voter issue for people who are figuring out who they’re going to support during the midterms,” she said.

Politico’s Betsy Woodruff Swan (@woodruffbets): “I have talked with two separate Democratic members of Congress in the last couple of weeks about January 6th … Both of them have said, offhandedly, ‘Nobody gives a bleep about January 6th'” pic.twitter.com/8n4SKQjPdC

Meanwhile, the media and Democrats want Americans to believe the hearings are important:

(Related: ‘I DEMAND EQUAL TIME!!!’ Trump Calls on TV Networks to Present his Side of the Case Amid Jan. 6 Hearings)