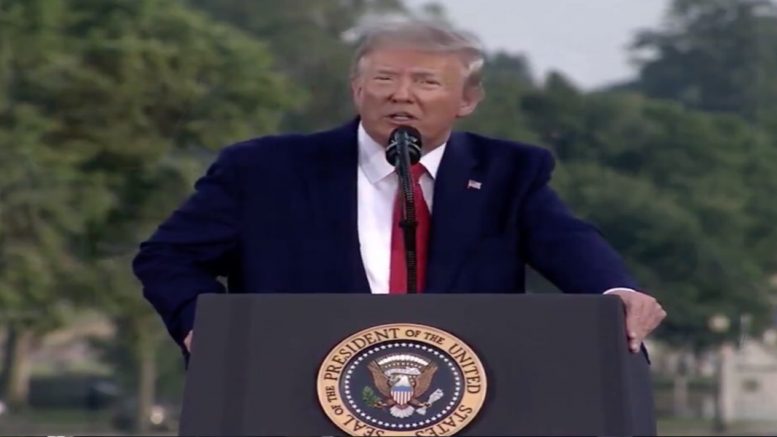 During a speech at the White House on Independence Day, the Commander in Chief issued a stern message to the members of the media who “falsely label their opponents as racists who condemn patriotic citizens– who offer a clear and truthful defense of American unity.”

The president’s message comes as some pundits in the media have repeated called the president and his supporters racist for differing political view points. It also comes among the recent statue defacing and toppling, the media attacking the President’s Mount Rushmore speech, and amid some who have criticized the Fourth of July for what it stands for.

“You slander people much braver and more principled than you; you’re slandering the young men who raised the flag at Iwo Jima and those who perished fighting for freedom in the Civil War. You slander them,” he told the media. “You are dishonoring their great legacy and their memory by insisting that they fought for racism and they fought for oppression.”

The president informed the media that they “did not fight for those things”, clarifying that they they fought for “the exact opposite”, adding: “We will not let the legacy of these heroes be tarnished by you.”

The Commander in Chief listed off what he believes all Americans want:

“We should all want the same thing. How can it be any different than those things?” Trump asked. “The more bitter you become, the more we will appeal to love and patriotism. And the more we will rise above your hate to build a better future for every child in our great country.” Video Below

President Trump's message to the members of the media who falsely label their opponents as "racists" pic.twitter.com/GUbaFacNBo

Here are some examples from the media that the president may have been referring to:

It is genuinely disgusting to see you lying like this. Have you no integrity? None?

Enemy of the people says what?

@washingtonpost vs. the opening

“We gather tonight to herald the most important day in the history of nations: July 4th, 1776. At those words, every American heart should swell with pride.“ pic.twitter.com/575q1EJscd

@DeanObeidallah’s “declared war on all those who aren’t loyal” vs. “we believe in equal opportunity, equal justice, and equal treatment for citizens of every race, background, religion and creed. Every child, of every color – both and unborn – is made in the holy image of God.” pic.twitter.com/9REj3f5a7A

Perhaps @NPR thinks that Lincoln was a confederate? pic.twitter.com/xMrWrDovMg

I think I’ll take “America’s future is in our hands” over “it is time to reconsider the global legacy of July 4, 1776” any day, thanks. pic.twitter.com/AEJV8VDXEn