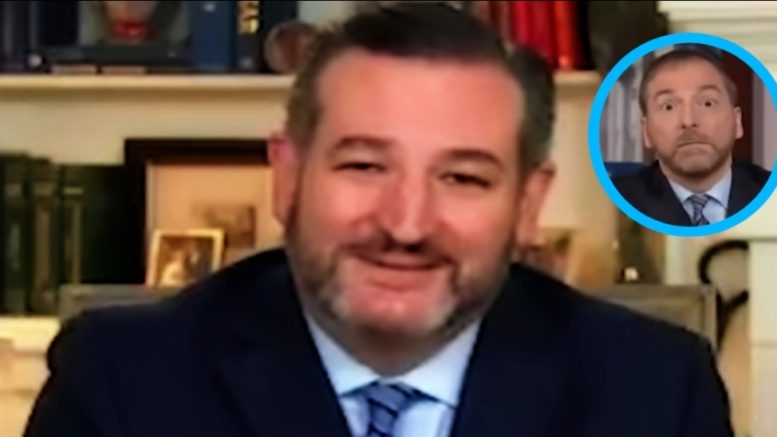 Following Senator Ted Cruz’s appearance on MSNBC’s Meet The Press, Axios news accused the senator from Texas of “repeating a conspiracy theory” that Ukraine interfered in the 2016 election.

Cruz and host Chuck Todd got into a heated exchange after Cruz said that he thinks there is “considerable evidence” that Ukraine interfered in the 2016 election.

Chuck Todd responded, “You do?” to which staff at NBC could be heard laughing in the background. “You know Senator, this sort of strikes me as odd.”

Cruz then went on to lay out more basis for why he feels Ukraine could have played a major part in interfering in the election and ripped Todd for how the press is “playing ridiculous and acting like they work for Adam Schiff!”

Soon after the interview between Chuck Todd and Senator Cruz aired, Axios tweeted: “NEW: Sen. Ted Cruz said on “Meet the Press” that Ukraine “blatantly interfered” in the 2016 election, repeating a conspiracy theory that experts warn has been promoted by Russian intelligence services.”

Senator Cruz immediately fired back at Axios and laid out four facts along with a video to back up his claim.

“[Axios] your bias is showing. Stop behaving like Schiff’s press secretary. Stop ignoring facts to push Dem narrative. This is why nobody trusts the media. Here are several FACTS that media chooses to ignore: (1) Hunter Biden was paid $83k a month from Ukraine’s biggest gas co. Continued Below

“FACT 3: Here’s what Politico reported on 1/11/17: “Ukrainian govt officials TRIED TO HELP Hillary Clinton and undermine Trump by publicly questioning his fitness for office. They also disseminated documents implicating a top Trump aide in corruption and suggested they were investigating the matter, only to back away after the election. And they HELPED Clinton’s allies research damaging information on Trump and his advisers, a Politico investigation found.” Axios, was Politico pushing a ‘conspiracy theory?’

“FACT 4: On 8/28/16, the Financial Times reported: ‘Kiev’s wider political leadership[did] something they would never have attempted before: INTERVENE, however indirectly, in a U.S. election.’ Axios, was the Financial Times pushing a ‘conspiracy theory’?”

“[Axios] & [Chuck Todd] are deliberately LYING. They know there’s significant evidence of Ukrainian corruption, but they refuse to report it. When anyone points to actual facts, they scream ‘Russian conspiracy.’ This isn’t journalism; it’s partisan propaganda. Chuck knows better.”

Caught On Camera: Swalwell Appears To Break Wind On Live TV While On Hardball, Denies It Was Him