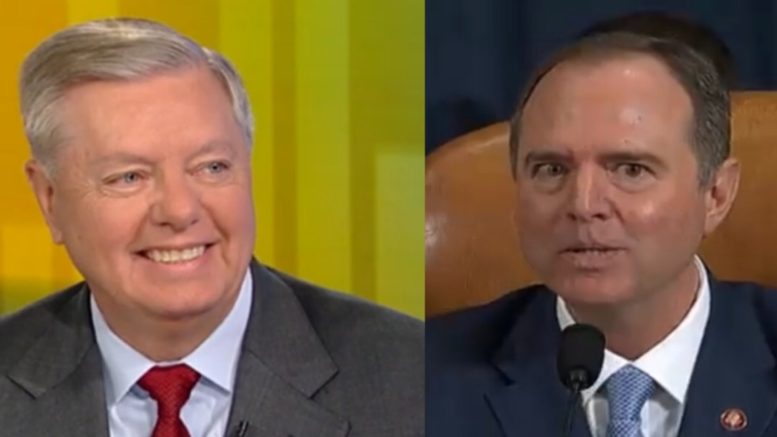 Last month, Graham told Bartiromo: “It’s impossible to bring this case forward, in my view, fairly, without us knowing who the whistleblower is and having a chance to cross-examine them about any biases they may have. So, if they don’t call the whistleblower in the House, this thing is ‘dead on arrival’ in the Senate,” Senator Graham warned. [Emphasized].

Asked if it is still dead on arrival in the Senate without hearing from the whistleblower, the South Carolina Senator said, “The process is illegitimate in the House; it’s not just the whistleblower.”

He clarified: “You don’t want to create a situation where an anonymous person can start impeachment proceedings against the president of the United States. You can’t get a parking ticket based on an anonymous allegation.”

“The hearings were held behind closed doors. The Intel Committee gathered all the facts. The president’s lawyer was never allowed to participate. They asked to call witnesses in the Judiciary Committee. They had one hearing in the committee with four professors and Nancy Pelosi said, ‘We’re gonna move forward with the articles of impeachment.’ This is a joke of process, it’s dangerous to the country. It’s the first impeachment scenario in the country started in the House, not without side counsel” Senator Graham explained.

“This is being driven by Schiff and Nadler– Pelosi partisan people. I think it’s gonna meet a quick end in the Senate,” he predicted. (Continued Below)

Bartiromo wanted to know who are some of the people Senator Graham is going to want to hear from if the impeachment moves to a trial in the Senate, and if the president is going to get a fair trial. “Are you going to demand that people like the whistleblower, Adam Schiff, Alexander Chalupa, Fusion GPS– are these some of the people or organizations you’re gonna want to question?” she asked.

The Senate Judiciary Chairman explained there are two ways to proceed: “You can have the president present a defense to prove in fact, that maybe the Ukraine was interfering in our election. The Russians stole the emails, not the Ukraine, but there’s articles suggesting Ukrainian officials met with Democratic operatives in 2016. I don’t know if that’s true,” he said.

“But here’s what I’m gonna do with the trial: I’m gonna try to get this over as quickly as possible— listen to what the House case– let them present their case, and if there’s nothing new and dramatic, I would be ready to vote. And we can do all this other stuff in the congressional oversight,” Senator Graham added.  [Emphasis added]. (Continued Below)

Asked if he is not going to have people come to testify, Senator Graham replied, “I am saying that I’m gonna end this as quickly as I can for the good of the country. When 51 of us say ‘We’ve heard enough’– the trial is gonna end, the president is gonna be acquitted. He may want to call Schiff, he may want to call Hunter Biden, he may want to call Joe Biden, but here’s my advice to the president: if the Senate is ready to vote and ready to acquit you, you should celebrate that and we can look at this other stuff outside of impeachment.” [Emphasis added].

“Impeachment is tearing the country apart. I don’t want to give it any more credibility than it deserves,” the South Carolina Senator expressed. [Empasis added].

Asked about the Adam Schiff obtaining phone records from Rep. Devin Nunes, John Solomon, and the president’s lawyers, Graham said, “I think it’s dangerous. What he did was he was looking at Rudy and found out Rudy made some calls to these folks.”

“Here’s what I would tell Adam Schiff: do you really want to start calling other members– Republicans, members of Congress in Oversight? Do you want me to call you to the Senate as part of Senate Oversight? Where does this insanity go?” he asked. (Video Below)

Bartiromo pressed Senator Graham on whether he will call Schiff forward and he said: “No. I’m not gonna participate in things I think will destroy the country. I’m not gonna call a bunch of House members to come to the Senate as part of Oversight. Now, if you’re a House member and you participated, you’re not above the law. But we’re not gonna turn the Senate into a circus. And I would tell Schiff, what you’re doing is very dangerous for the separation of powers.”

“Adam Schiff is doing a lot of damage to the country. And he needs to stop,” he demanded. “Mueller spent two years and 25 million looking at Trump. This whole Ukrainian stuff is a joke. They got the money, they got the meeting with the president. They didn’t investigate Joe Biden or Hunter Biden. There is no there-there,”

“The accountability comes in November of 2020 when the public sees what the House has done with their majority. They spent all their time trying to destroy the Trump presidency. They’ve done nothing beneficial to the American people. You know who may be the most valuable player for the Republican party in the 2020 election cycle is Adam Schiff,” Senator Graham added. [Emphasized].