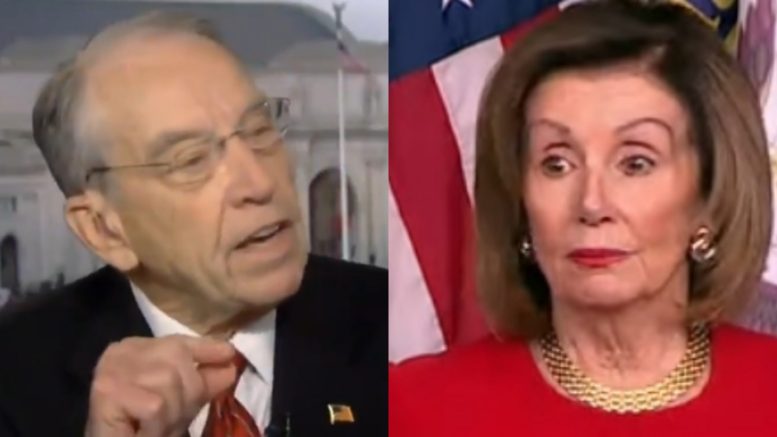 On Thursday, Senator Chuck Grassley responded to House Speaker Nancy Pelosi’s suggestion that she could hold back articles of impeachment from the Senate until she feels there will be a “fair” trial.

Pelosi intially brought up the strategy when speaking with reporters soon after the House voted along party lines to impeach President Trump.

“Is she saying that they did not give the President a fair trial in the House of Representatives, and she wants to have the Senate do the House’s work? I don’t understand that,” Grassley said in reaction to Pelosi’s negotiation tactic.

Senator Grassley went on to point out that the House and Senate do negotiate substance of bills, but he said “they should not be negotiating with us how to do our business.”

“It’s very unfair to the President,” Grassley proclaimed. “The President is entitled to a speedy trial just like anybody else, and we oughta be moving forward to it.”

Maria Bartiromo asked Senator Grassley how long Pelosi can legally “sit on” the articles of impeachment before handing them over to the Senate.

“Legally, not at all. Politically, as long as she can get away with it,” Sen. Grassley declared.

“Don’t forget in March she said that impeachment is so important, it’s gotta be bipartisan — you gotta have a good basis for it,” he added. “But this isn’t bipartisan snd they don’t have a Constitutional basis for impeachment of treason, bribery, etcetera.” Video Below