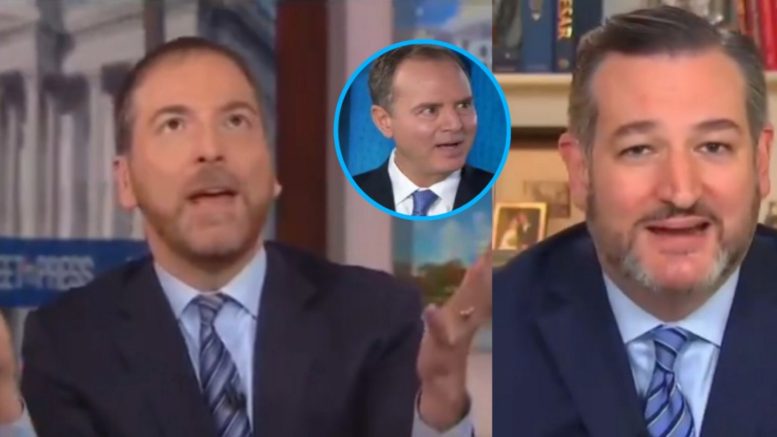 Senator Ted Cruz (R-TX) ripped host Chuck Todd Sunday on NBC‘s “Meet The Press” when being pressed on whether Ukraine interfered in the 2016 election.

Cruz also called out Todd for suggesting that Senator John Kennedy “was a stooge for Putin”, pointing to last weekend’s interview where the NBC host told Sen. Kennedy: “You’ve done exactly what the Russian operation is trying to get America politicians to do. Are you at all concerned that you’ve been duped?”

Chuck Todd asked Sen. Ted Cruz during the interview, “What I don’t understand is why you believe that if an American is committing corruption, we should ask a foreign government to announce an investigation. Is that appropriate or do you go to American authorities?”

The Texas Senator fired back: “I believe any president, any justice department has the authority to investigate corruption. In this case, there was serious evidence on the face of corruption. The reason Hunter Biden got that position is because his daddy was vice president of the United States. If his name was Hunter Smith, they wouldn’t pay him a million dollars a year to serve on the board.”

Asked if he believes Ukraine meddled in the election in 2016, Senator Cruz said, “I do. And I think there’s considerable evidence.”

Chuck Todd responded, “You do?” to which staff at NBC could be heard laughing in the background. “You know Senator, this sort of strikes me as odd,” then he proceeded to bring up moments in the 2016 election where Cruz and then-candidate Donald Trump attacked each other in the race politically. (Continued Below)

“I appreciate you dragging up all that garbage, that’s very kind of you. Go ahead,” Cruz told Todd.

Asked if it is not possible that President Trump is capable of creating a false narrative about somebody in order to help him politically, the Texas Senator laughed and said, “Except that’s not what happened. The President released the transcript of the phone call. You can read what was said on the phone call.”

“Let me point out a game that the media is playing, a question that you’ve asked a number of people: you’ve said to Senators as sort of aghast, ‘Do you believe that Ukraine and not Russia interfered in the election?’ Now that in a court of law would be struck as a misleading question. Of course, Russia interfered in our election. Nobody looking at the evidence disputes that,” Cruz stated. (Continued Below)

Todd tried to defend Ambassador Valeriy Chaly, who wrote the op-ed, in which they slammed then-candidate Donald Trump, but Cruz shot back: “You’re saying they had disagreements with Donald Trump and they wanted Hillary Clinton to win to get elected?”

“Chuck, I understand that you want to dismiss Ukranian interference because A, they were trying to get Hillary Clinton elected, which is what the vast majority of the media wanted anyway. And B, it’s inconvenient for the narrative. You know, it’s hysterical two years ago there was article after article after article in the mainstream media about Ukrainian interference in our elections. But now, the Democrats have no evidence of a crime, no evidence of violating the law. And suddenly, Ukraine interference is treated as the media clutches their pearls. ‘Oh my goodness! You can’t say that!'” Senator Cruz declared. (Video Below)

“Last week, Chuck, you called Senator John Kennedy basically a stooge for Putin. The press needs to stop playing ridiculous and acting like they work for Adam Schiff!” the Texas Senator demanded. [Emphasized].

Ted Cruz absolutely ANNIHILATING liberal activist, conspiracy theorist, and fake news propagandist, Chuck Todd. Chuck is the second dumbest buffoon in the media, behind only Brian Stelter. Chuck is a disgrace to “journalism.”pic.twitter.com/TcbuJq5Pvx

President Trump took note of Senator Ted Cruz’s interview and tweeted quotes from part of the interview: “Any president has the authority to investigate corruption. The President himself released the transcript of the call. Now the Democrats have no evidence of a crime and no evidence of violating the law.”

“This is a kangaroo court in the House, but it’s going to go to the Senate, it’s going to go nowhere. They are going to impeach not because they have the evidence, but because they hate the president. I think the American people know that this is a waste of time, this is Democrats putting on a circus. @SenTedCruz interviewed by Sleepy Eyes Chuck Todd.” Trump added.

….it’s going to go nowhere. They are going to impeach not because they have the evidence, but because they hate the president. I think the American people know that this is a waste of time, this is Democrats putting on a circus. @SenTedCruz interviewed by Sleepy Eyes Chuck Todd

(Related: Schiff Says Trump ‘Doesn’t Give A Sh**’ What’s Good For America Or Ukraine, Biggs Reacts: ‘He’s As Inaccurate There As He Was About The Russian Delusion”)