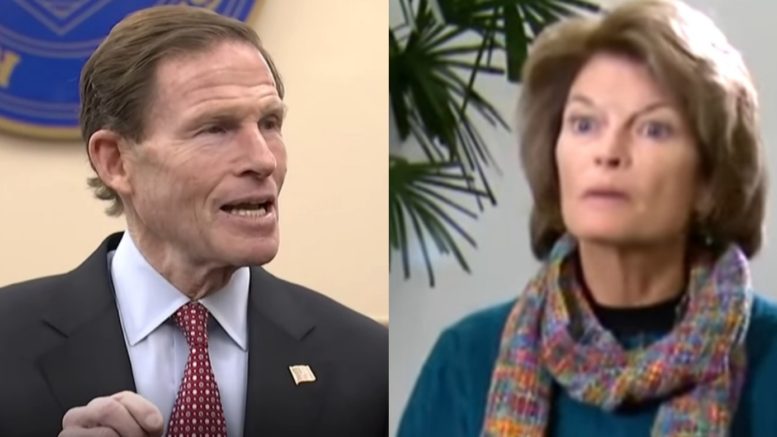 Democrat Senator Richard Blumenthal issued a statement to the press in reaction to Senator Lisa Murkowski (R-AK) saying she was “disturbed” when Senate Majority Leader Mitch McConnell indicated there would be “total coordination” between the White House over the upcoming presidential impeachment trial.

“We’ll be working through this process, hopefully in a very short period of time in total coordination with the White House counsel’s office and the people representing the President in the well of the Senate,” McConnell said while appearing on Hannity earlier in December.

In response to McConnell’s remarks, Senator Murkowski told Alaskan TV station KTUU, “And in fairness, when I heard that I was disturbed. To me it means that we have to take that step back from being hand in glove with the defense, and so I heard what leader McConnell had said, I happened to think that that has further confused the process.”

When pressed by reporters about Murkowski’s interview, Sen. Blumenthal voiced his belief that some of his Republican colleages are thinking exactly what the Alaskan senator is thinking, and he expressed his hopes that they will follow in her footsteps in expressing negativity against McConnell.

“My hope is that some of my Republican colleagues will have the same misgivings that Senator Murkowski expressed just yesterday,” Blumenthal told the press.

He continued, “I believe Senator Murkowski is saying what a lot of my Republican colleagues are thinking — in fact, saying privately, which is: this proceeding has to be credible, fair and honest.” Video Below

“And so far, Mitch McConnell is sabatoging this proceeding by saying he won’t be impartial,” Blumenthal proclaimed. “He will do the President’s bidding.”

“In no trial does the defendant have the say about how the trial is going to be conducted,” he declared. “The defendant doesn’t get to set the rules.” Video Below

VP Pence To US Governors: “Call Nancy Pelosi & Call Chuck Schumer & Tell Them To Get Off The Dime”