Sanders weighed in on the current Democratic Senators who are running for president and explained why she doesn’t want to see an “extended trial” in Senate if the House votes to impeach President Trump.

Judge Jeanine displayed a poll that shows independent voters are souring on impeachment in recent weeks. 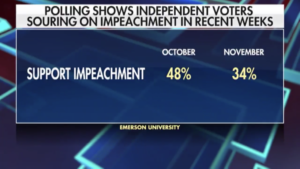 “In October, those supporting impeachment of the independent voters, 48 %– November, 34%. That’s a huge drop in the group that is so essential that everyone is fighting for. What does that tell you?” Judge Jeanine asked Sarah Sanders.

“To me, it’s not surprising at all, because we knew all along that there was no scandal here, that it was a complete sham that was dreamt up by Adam Schiff– another hoax. He failed with the Russia hoax and now, he came up with this big process to try to distract America from all the good things that the President is doing. It’s no surprise that after two weeks of hearing all of their star witnesses admit not to witnessing anything, that this thing has completely tanked. And people are sick and tired of watching it,” Sanders said.

“They want Congress to actually get something done. They want them to be productive. They’d love to see things like USMCA passed, … infrastructure, drug pricing, or anything that actually helps impact the country,” Sanders continued. “And yet, instead of doing that, you can see that the Democrats have no plan, no vision, no solutions, and all they can do is attack this president. And people are paying attention that and the numbers reflecting it.”

Judge Jeanine said that she wants a full-blown trial in the Senate so that President Trump can have fair due process that wasn’t given in the Democratic-led House “circus”. She asked Sanders, “What do you think should happen as it proceeds, and it appears it will proceed– you know, Jerry Nadler said by the end of the year, we’re doing it.” (Continued Below)

Sanders replied: “After all of this — after they’ve seen all of the people come forward and talk about the fact that nothing really took place, I’d love it if Democrats somehow came to the realization this was a waste of time. But I think that I’m living in la-la land if I think that’s gonna happen. I’m pretty sure it’s gonna go forward, maybe it goes to the Senate and we do the big trial.”

“However, I don’t want to see them do one of those extended trials and here’s why: because it takes people like Elizabeth Warren and other Senators, Bernie Sanders… off of the campaign trail. And I want them out and about around this country as much as possible because the American people need to see the clear contrast that they have in the ideas of the craziness coming from Bernie Sanders and Elizabeth Warren, versus the path of prosperity that we’re on under this President,” she said.

“They have come up with more lunatic plans in the last couple of months, and I want voters to know exactly what they’re going to do if they were ever to be elected to be president,” Sanders added. (Video Below)

“The American people are much smarter than the Democrats are giving them credit for, which is why you are seeing the numbers tank,” Sanders reiterated of the poll numbers dropping for impeachment.

“Imagine how much better we are going to do after [Trump] gets reelected in November. I think the sky is the limit and the President is going to keep delivering. And I think the Democrats are gonna keep losing and for some reason they can’t figure out why. Attacking the President is never going to work. One, he’s tougher than they are, he’s smarter than they are, and he’s always going to end up beating them. And so, you’d think that maybe they’d start to work with him, instead of just trying to attack him,” the former press secretary suggested.

"It's no surprise that after two weeks of hearing all of their star witnesses admit to not witnessing anything that this thing has completely tanked and people are sick and tired of watching it." – @SarahHuckabee pic.twitter.com/x8Lzqlhfyy

(Related: Sarah Sanders On The Prospects Of Running For Office: “I Feel Like I’ve Been Called”)