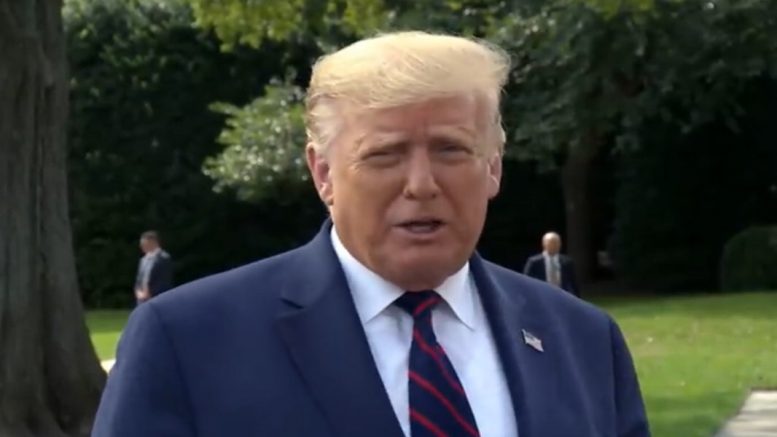 45th President Donald J. Trump is calling for “the rightful winner” to be announced or “declare the 2020 Election irreparably compromised and have a new Election, immediately” after it was revealed that the FBI reportedly colluded with Big Tech to suppress the Hunter Biden laptop story during the 2020 presidential election.

His request follows Meta CEO Mark Zuckerberg’s admission last week on “The Joe Rogan Experience” where he revealed that the FBI approached Facebook to warn about a “dump” of “Russian propaganda” going into the election.

“Basically, the background here is the FBI, I think, basically came to us- some folks on our team and was like, ‘Hey, just so you know, like, you should be on high alert… We thought that there was a lot of Russian propaganda in the 2016 election. We have it on notice that, basically, there’s about to be some kind of dump of that’s similar to that. So just be vigilant,'” Zuckerberg told host Joe Rogan.

BREAKING: Mark Zuckerberg tells Joe Rogan that Facebook algorithmically censored the Hunter Biden laptop story for 7 days based on a general request from the FBI to restrict election misinformation. pic.twitter.com/llTA7IqGa1

“So now it comes out, conclusively, that the FBI BURIED THE HUNTER BIDEN LAPTOP STORY BEFORE THE ELECTION knowing that, if they didn’t, ‘Trump would have easily won the 2020 Presidential Election’, 45th President Trump wrote on Truth Social Monday, referring to a new poll conducted by Technometrica Institute of Policy and Politics (TIPP).

The poll revealed 78% of Americans say former President Donald Trump would have won the 2020 presidential election if voters had been given the truth about Hunter Biden’s laptop, instead of being told it was merely “Russian disinformation.”

“Terming the laptop ‘disinformation’ by the FBI, Intelligence Community, Congress, and the Biden campaign, along with Big Tech, impacted voters,” TIPP President Raghavan Mayur said. “A significant majority — 78% — believe that access to the correct information could have been critical to their decision at the polls.”

Then-Democrat presidential candidate Joe Biden in 2020 spread the disinformation narrative during the one and only debate he did with President Trump and had shared a letter from a 51 intelligence officials aligned with him, saying the laptop story was a Russian disinformation campaign, echoing the 2016 allegations of Russian meddling in the presidential election.

The TIPP poll found 74% believe the FBI and Intelligence Community deliberately misled the public on suggesting the laptop was a Russian effort to hurt Biden’s candidacy. Meanwhile, a large majority of Americans believe the laptop is real. Just 11% still believe Biden’s narrative it was Russian disinformation.

“This is massive FRAUD & ELECTION INTERFERENCE at a level never seen before in our Country,” President Trump also wrote in his post Monday on Truth Social.

“REMEDY: Declare the rightful winner or, and this would be the minimal solution, declare the 2020 Election irreparably compromised and have a new Election, immediately!” the 45th President urged. 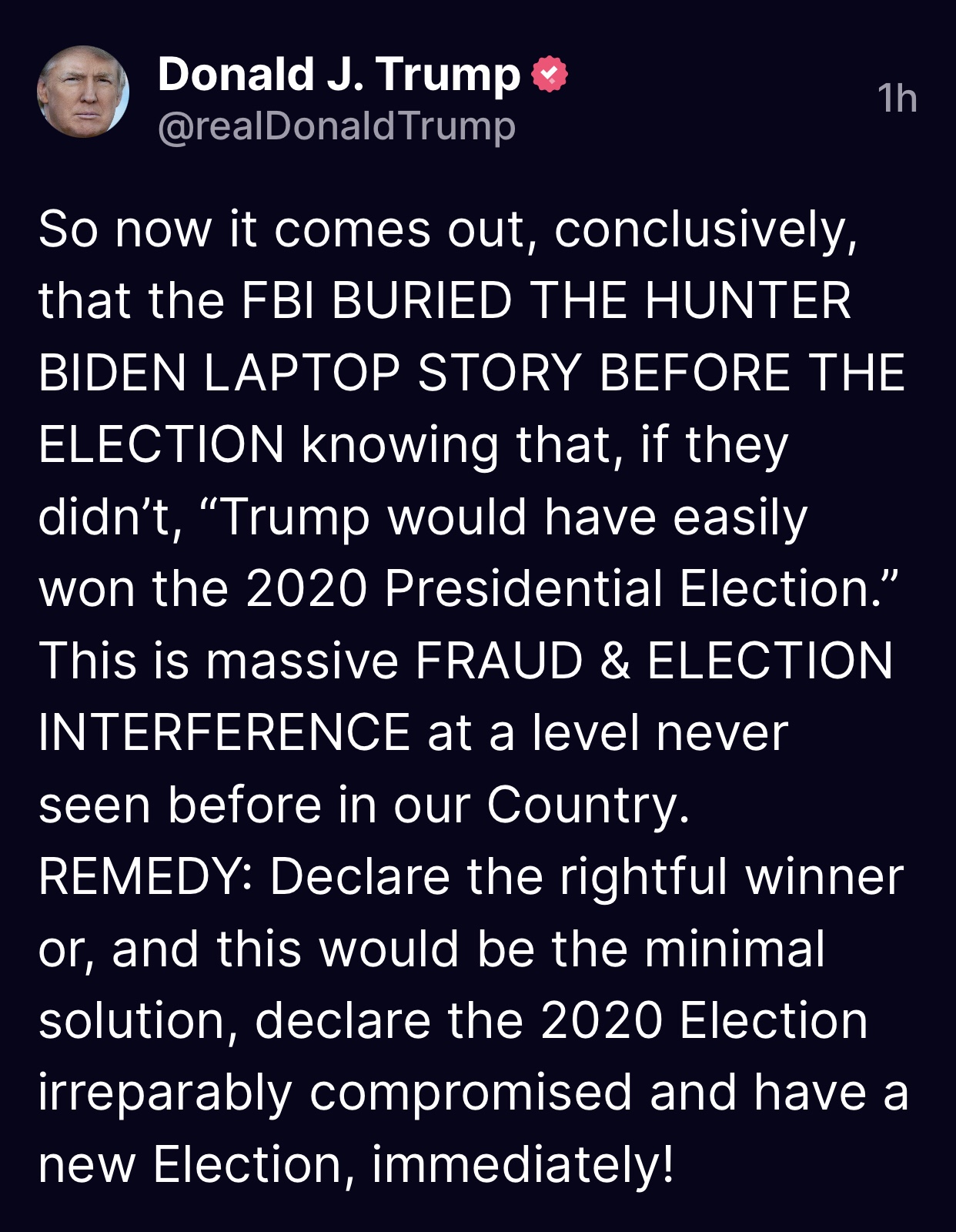 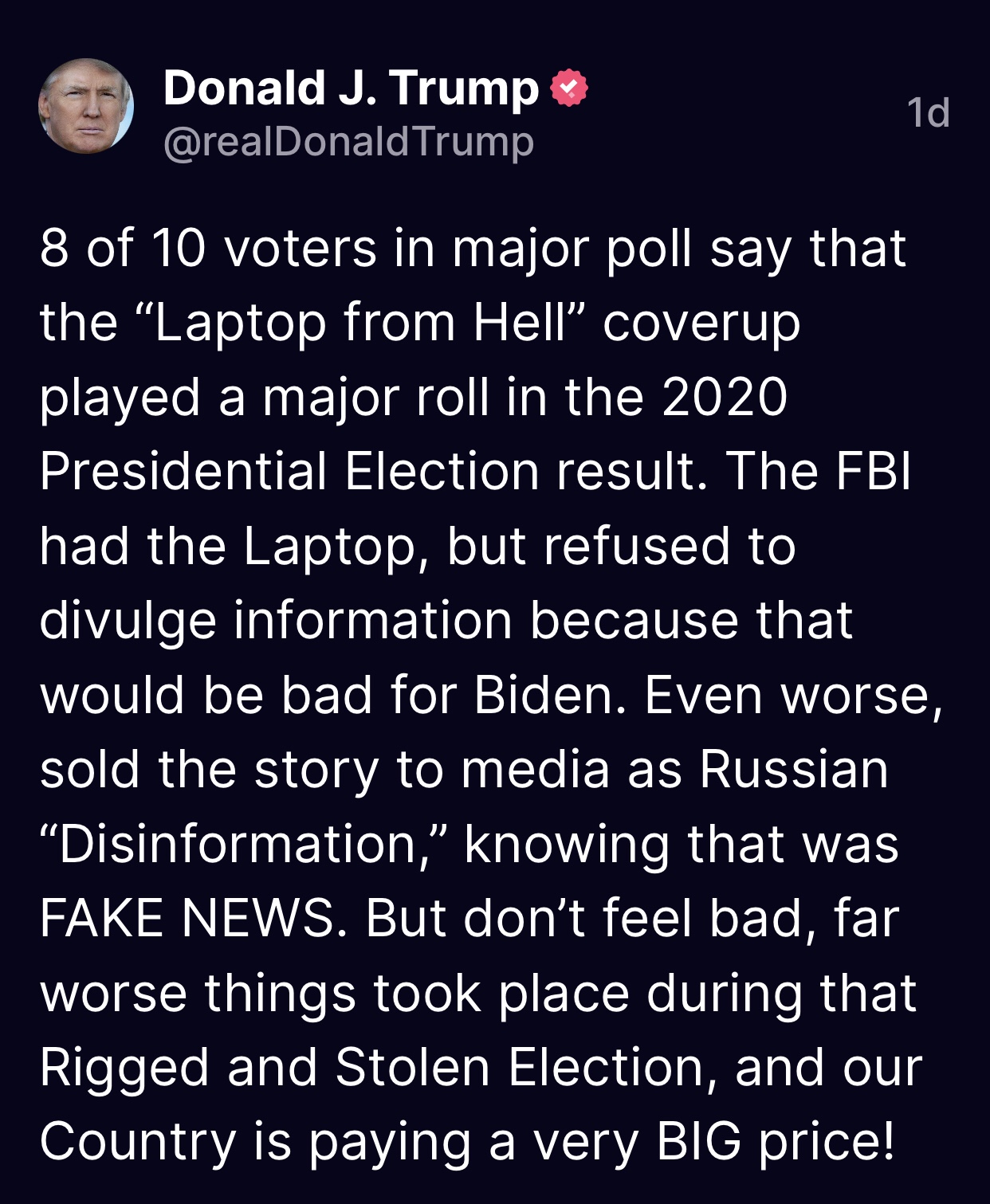 Related: ‘We Will Hold all of Them Accountable’: McCarthy Vows After Zuckerberg’s Admission of Suppressing Hunter Laptop Story