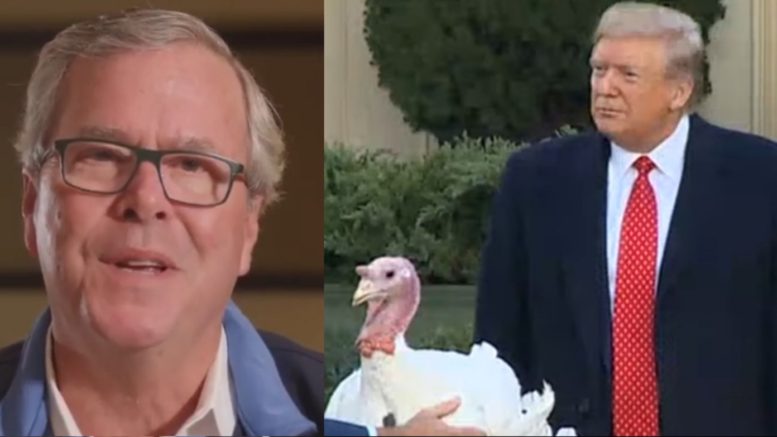 According to The New York Times, the bill signed by the President on Wednesday “authorizes sanctions on Chinese and Hong Kong officials responsible for human rights abuses in Hong Kong,” signaling support for pro-democracy activists and escalating tensions with Beijing” as Trump is in the middle of trying to hammer out a trade deal with China.

He then warned that any consequences stemming from the bill would “be borne by the United States.”

Bush, who has been heavily critical of President Trump stemming back to the 2016 election, barely ever voices support for decisions made by the President and his administration. But, of course, he couldn’t end his brief statement of gratitude without undermining President Trump’s policy in Syria. See Below

“Supporting Kurds in Syria would be icing on the cake,” Jeb concluded.

The latter remarks from Jeb are likely in response to President Trump’s decision to withdraw American military support for Kurdish fighters in northern Syria, as he faced backlash from both sides of the aisle, including from Jeb’s brother & former President George W. Bush.

You can read more about the by CLICKING HERE. See Below

Trump Signs Hong Kong Democracy Legislation That Has Angered China https://t.co/X0WzR6gI0b thank you President Trump. Supporting the Kurds in Syria would be icing on the cake.

Related Article: As The 2020 Race Heats Up, Alyssa Milano Thinks Jeb Bush Should Run For President

‘Many People Should Be in Jail’: Rep. MTG Reacts to Clinton Campaign Allegedly Paying to ‘Infiltrate’ Trump Tower, WH Servers to Link Trump to Russia