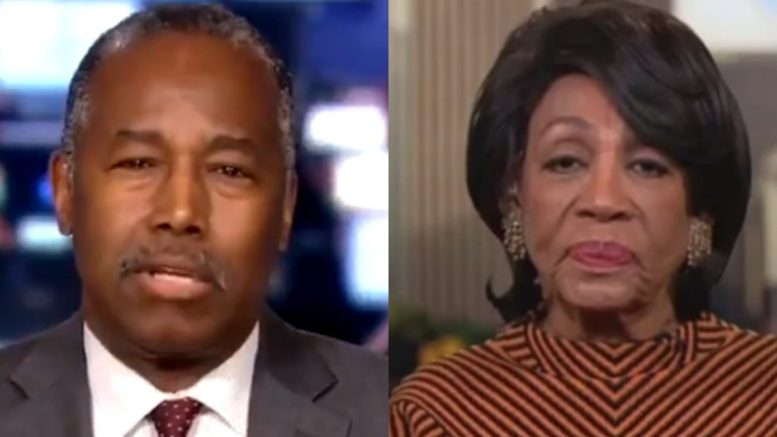 On Friday’s airing of Hannity, HUD Secretary Dr. Ben Carson responded to the “scathing” remarks made by Congresswoman Maxine Waters who took a jab at him while appearing on MSNBC’s AM With Joy.

Waters suggested to Joy Reid that Dr. Carson lacked the “intelligence” to be HUD Secretary in response to his plan to gut the Fair Housing Act.

Waters said, “I sent him a letter, and he sent me a letter claiming that I had no manner, etc. I basically said to my staff, I really don’t have time to be bonded by somebody who does not know the difference between REO and OEO.”

“This guy just doesn’t have the background, the capability, the intelligence to do the job. He does not know what he’s doing,” she declared. “He doesn’t care about this issue.”

In his reaction to Maxine. Carson said African Americans “are not to be taken for granted” and said “they’re actually opening their eyes and they’re looking and they’re seeing ‘Do I want to deal with somebody who’s actually getting things done that’s helping me, or someone who just talks a good game?”

“Representative Waters got a little upset because I pointed out to her, very vividly, after she sent out the scathing, nasty letter to the President, that shamelessness is being a 30-year politician and having all of these homeless people in your district and trying to blame it on somebody else,” Carson said. Video Below

She won’t even meet with me,” Dr. Carson continued. “I offered meetings for the last couple of years. She doesn’t even want to talk about it.”

“We want people to rise,” Dr. Carson concluded. Video Below

.@SecretaryCarson has been trying to meet with @RepMaxineWaters to help get people in her district out of poverty but she won’t meet with him. pic.twitter.com/GwsFPAsMMQ