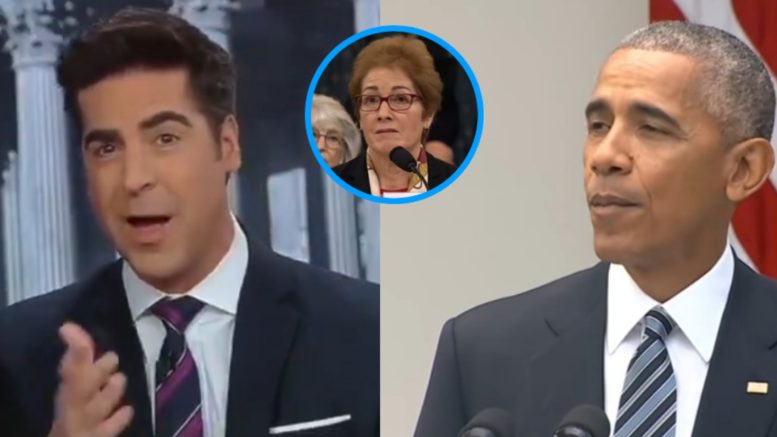 Before giving Jesse Watters a chance to respond, Juan Williams mentioned how Ambassador Yovanovitch said in her testimony that she felt “smeared” after learning that both President Trump and Ukrainian President Zelensky had “unfavorable” opinions about her, which could have played a part in what led to her being fired.

“Oh poor baby,” Watters replied. “When Obama was President, ambassadors were coming back in body bags, now everone’s upset cause one got fired. So what? People get fired all the time.”

“Bribing? How about when Obama sent pallets of cash to Iran? That’s more bribery than this,” Watters declared.

“Freezing aid for a blink of an eye. That’s a bribe?” he questioned. “Tweeting is now an impeachable offense? That’s witness tampering?” Video Below

Donald Trump Jr. tweeted a video of Watters making the remarks and captioned it: “Great job @JesseBWatters you nailed exactly what the media is neglecting to even mention… on purpose of course. Give me a break.”

Trump Issues a Mother’s Day Message to All, Including His ‘Very Unfair Radical Left Democrat Opposition’