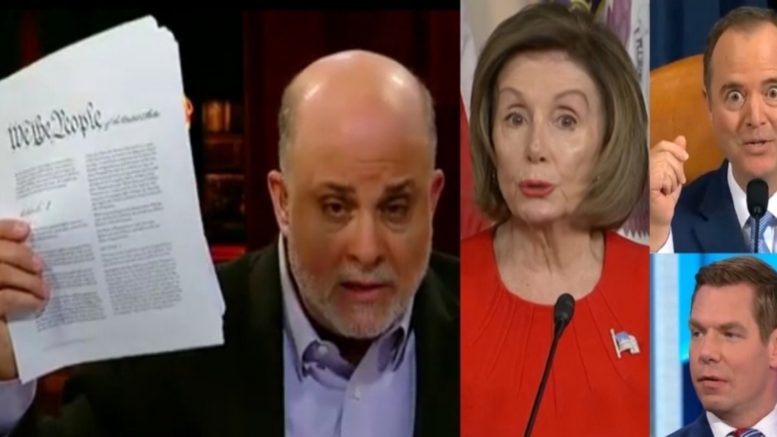 Levin called Democrats’ inquiry an “outrageous violation of the Constitution” for the lack of due process, and also attacked the media for its claim of wrongdoing regarding President Trump’s tweet earlier in the day during the proceedings.

“How often is the Constitution read during these hearings?” Levin asked. “Never. Never. And it’s never going to be because they are destroying the Constitution of the United States. They are undermining the franchise. They are trying to influence the 2020 election. And by they, I not only mean the Democrats on this committee, I mean the media.”

“To listen to the media analysis of what’s taking place in these hearings is absurd,” he continued. “It’s disgraceful. They talk about Russia. They sound like the ‘Russian media’. The Democrat Party and the media are like this. That’s why I wrote the book. They are like this. So, the president is never going to get a break from the media.” (Continued Below)

“You name one newsroom in this country that is calling it straight here,” Levin recommended. “None of them. None of them. I’m not picking on anyone. I’m saying none of them. The President’s tweet today, not a single newsroom that I watched put the tweet up there in full!” (Video Below)

Here’s what the President tweeted America: “Everywhere Marie Yovanovitch went turned bad. She started off in Somalia, how did that go? Then fast forward to Ukraine, where the new Ukrainian President spoke unfavorably about her in my second phone call with him. It is a U.S. President’s absolute right to appoint ambassadors.”

(Related: Swalwell Says He Will “Possibly” Use Trump’s Tweet About Yovanovitch In Articles Of Impeachment)

“This woman is intimidated by this?” Levin asked. “We’re told 33 years in the State Department where they have the most brutal bureaucrats on the face of the earth. She was facing down dictators, … Oh my God! This tweet intimidated her. Now how can the tweet intimidate her? She didn’t even know about that tweet until ‘commissar’ Adam Schiff read the tweet! And he didn’t even read the full tweet. He read part of the tweet.”

Related: Jesse Watters: “When Obama Was President, Ambassadors Were Coming Back In Body Bags. Now Everone’s Upset Cause One Got Fired”