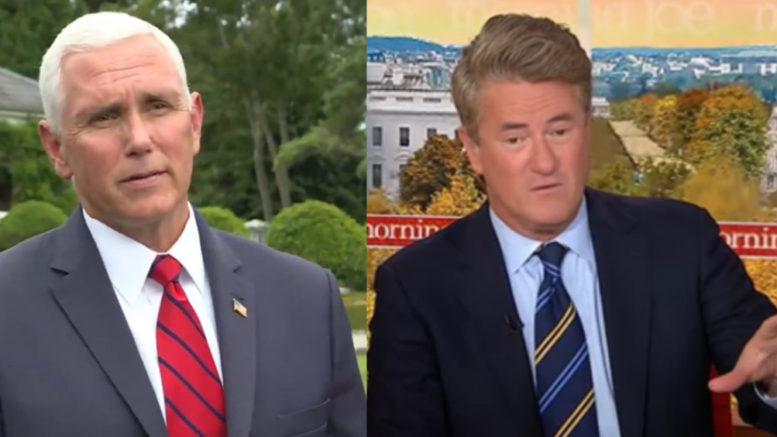 Co-host of MSNBC’s “Morning Joe”, Joe Scarborough, took to Twitter Saturday in a lengthy rant where he called on Republicans to allow Vice President Mike Pence to “serve out Trump’s term”.

Scarborough’s tweets pertain to the current events that occurred throughout the week, in regards to the President and his administration, which provoked hysteria among Democrat lawmakers and the leftwing media.

Joe Scarborough wrote on Twitter, “The events of the past week have moved at a staggering pace. Trump’s betrayal of the Kurds, Mulvany’s public confession, and the open corruption of sleazy self-dealing at Doral show a president unfit for office. Republicans must allow Mike Pence to serve out Trump’s term.”

“A question for all members of Congress: Should a president be allowed to publicly ask foreign governments to interfere in America’s presidential elections?” he asked.

Then Scarborough claimed, “Donald Trump has already: 1. Told a news host he would take political assistance from foreign governments, 2. Withheld military support from a US ally until they promised to dig up dirt for his campaign, and, 3. Asked China publicly to help destroy his political opponent.”

Former Deputy Assistant to President Trump, Dr. Sebastian Gorka, responded to Scarborough on Twitter and asked, “Or what Joey? You’ll bleach your hair even more?” (Continued Below)

“Of course the media and the Democrats are seizing on something he said,” Levin said. “Every day, it’s something else to prove there was a quid pro quo. It’s so absurd.”

“There’s an investigation going on, going back to 2016 and even before, by a U.S. attorney and by the Attorney General, looking into the early aspects of the phony Russia collusion issue and Ukraine — and that’s what [Mulvaney was] talking about — not Biden,” Levin continued. “There is an investigation going on with the Department of Justice, we all know this — Bill Barr announced it.” (Continued Below)

“Why is this a scandal? Why is this a problem? It’s not,” Levin said. “Why are the media so defensive of the Democrats and the Democratic Party? Why aren’t they calling for a special counsel to investigate it like they did with Russia and Trump?”

The events of the past week have moved at a staggering pace. Trump’s betrayal of the Kurds, Mulvany’s public confession, and the open corruption of sleazy self-dealing at Doral show a president unfit for office. Republicans must allow Mike Pence to serve out Trump’s term.