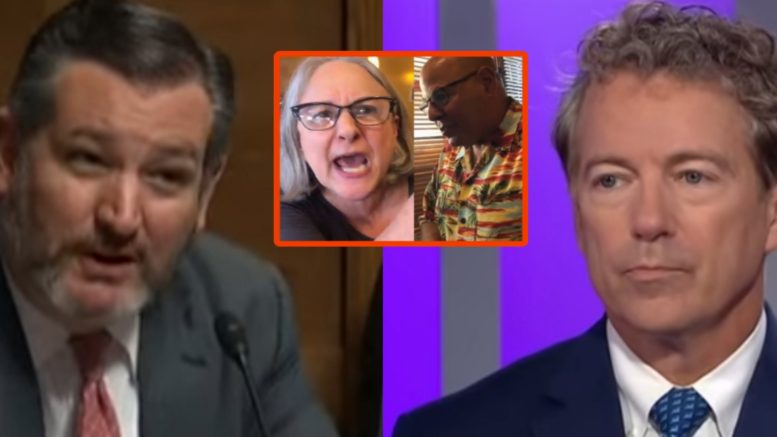 On Friday, a video surfaced on Twitter showing what appeared to be a grown man and woman heckling Senator Rand Paul at a restaurant in California.

Senator Paul’s communications director Sergio Gor, who is traveling with the Senator on his book tour,  captured the video and posted it on Twitter with the caption:  “While having lunch with @RandPaul in California, we got verbally assaulted by these aggressive libs complaining about incivility.”

“You just ran into two people from New York, kiddo, and we’re not putting up with your Republican bulls–t,” an angry woman yells right after she flipped off the camera.

“You’re public officials and I have a right to speak to you,” said the man that was with the irritated woman.

After seeing video of the incident, Senator Ted Cruz tweeted out his reaction to it, which he said, “This is wrong. This anger & rage is unhealthy for our Nation. Treat each other with civility (both sides) even if—especially if—we disagree.” See Below

This is wrong. This anger & rage is unhealthy for our Nation. Treat each other with civility (both sides) even if—especially if—we disagree. https://t.co/cBZ2tdWf4x

Related Article: Ted Cruz Discloses The Best Approach To Handle The Left ‘Consumed With Rage’: ‘Lighten Up, Have Some Fun, Smile’

Former Arkansas Governor Mike Huckabee also gave his take on the incident in a seperate tweet.

We leave you with Huckabee’s reaction:

These unhinged old loons screaming at @RandPaul are probably someone's grandparents. Do they hope their grandkids turn out like this? I actually feel sorry for them. Do they really think they are winning? Uncorked rage, hate, and vile. They need help. https://t.co/cCCrG5Rwiu