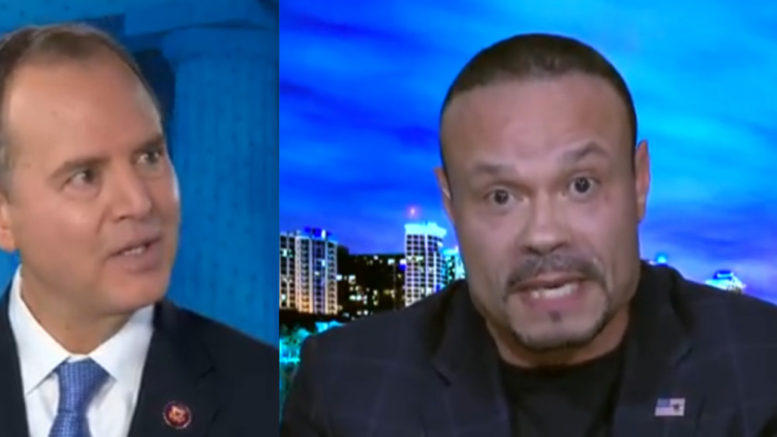 “Just to be clear, the captian of the swamp sleeze, Adam Schiff, who has a reputation for thorough and complete dishonestly, bold dishonesty! He’s actually brave about his dishonesty– he goes out and speaks to the nation about evidence that he doesn’t have frequently,” Bongino said. “He wants to remove a duly elected President.”

Bongino explained that the American people elected President Trump, but Adam Schiff, however, wants to remove the President based on an alligation he lied about. “There was no promise in the phone call; we now have the transcript. [Schiff] wants to do it, but they don’t even want to get testimony from the actual whistleblower?” he asked.

“I thought he said this was the key to this devastating deal that was worthy of treason, bribery, high crimes or misdemeanors. It just shows you again that anytime Adam Schiff is the face of something, you should double and triple question everything because it’s probably a lie or a false alligation,” Bongino recommended.

Schiff recruited two former National Security Council aides who worked alongside the CIA whistleblower at the NSC during the Obama and Trump administrations: Abigail Grace and Sean Misko. (Continued Below)

“One more angle on this that I wish people would explore– Do you know there are people in the White House National Security Council, the executive branch of our government, that left, nothing illegal about that. But left and went to work with Adam Schiff on his committees over there. Why would you do that? That’s kind of an unsual move. What’s going on over there? And I’d like to explore that relationship a little more too,” Bongino expressed.

“People still have contacts obviously based on prior professional relationships to Trump’s White House– people advising Donald Trump, whose sole purpose on the national security council is to provide President Trump with national security information, to make life or death decisions left. And then, went to go work for the opposition political party, under Adam Schiff on the Intel Committee,” Bongino said.

“Why would you do that?” He asked. “[It’s not] illegal, but I’m suggesting it’s unusual. These people still have professional contacts from where the leak, we know imminated from, the national security council.” (Continued Below)

Abigail Grace, who worked at the NSC until 2018, was hired in February, while Sean Misko, an NSC aide until 2017, joined Schiff’s committee staff in August, the same month the whistleblower submitted his complaint.

Grace, 36, was hired to help Schiff’s committee investigate the Trump White House. That month, Trump accused Schiff of “stealing people who work at White House.” Grace worked at the NSC from 2016 to 2018 in U.S.-China relations and then briefly at the Center for a New American Security think tank, which was founded by two former senior Obama administration officials.

Misko, 37, worked in the Obama administration as a member of the secretary of state’s policy planning staff under deputy chief of staff Jake Sullivan, who became Hillary Clinton’s top foreign policy official during her 2016 presidential campaign. In 2015, Misko was the director for the Gulf states at the NSC, remaining there into the Trump administration’s first year.

Misko often clashed with other NSC personnel at meetings. Both Grace and Misko were close to Lt. Gen. H.R. McMaster, Trump’s national security adviser from Feb. 2017 until May 2018. (Video Below)