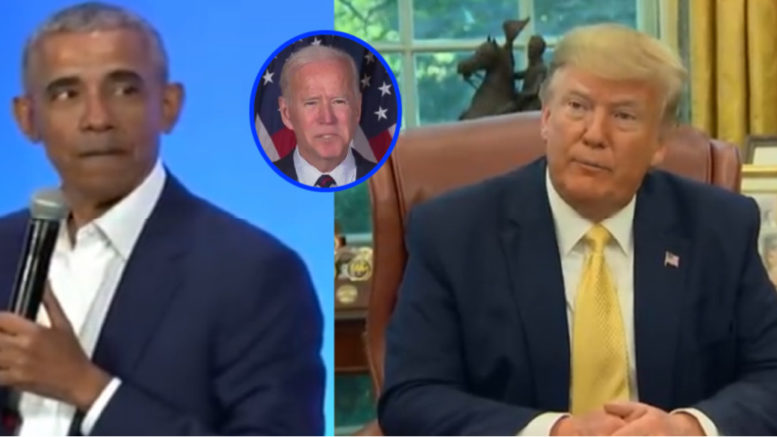 President Donald Trump spoke with host Judge Jeanie on Fox News’ “Justice” on Saturday night in a wide ranging interview and one particular subject focused on the Commander in Chief’s July 25th phone call with Ukrainian President Volodymyr Zelenky and the “whistleblower” filing a complaint.

Former President Barack Hussein Obama has been “hiding from questions” about former Vice President Joe Biden and his son Hunter, pertaining to his Ukraine dealings, President Trump suggested during the interview.

“If you take a look at it, Adam Schiff made up a phony, fraudulent statement and he read it though if I said it,” President Trump said referring to Schiff’s fictional remarks that he claimed as being a “parody” of the phone call, during a congressional hearing last month. “My phone call was a perfect call with the President of Ukraine. It was congenial, friendly, no pressure, no blackmail, as he [Zelensky] said.”

“What the problem is, Adam Schiff made up something, fraudulent. He made up a conversation and he read it to Congress … and the American people. And it was horrible. It was a fraudulent thing that he just made up ‘out of thin air’. It was a terrible thing that he was allowed to do that. Very strong actions should be taken against this guy, because I’ve never even heard of thing like that,” he continued.

President Trump noted that Democrats didn’t think the White House would release the transcript. “It was a call that was taken, very accurately taken. When I released the call, that really turned things over because now they start with a perfectly, fine call. It was a standard, very nice call. And it’s a fraud being perpetrated on the American people by Adam Schiff, by Nancy Pelosi,” he said. (Continued Below)

Judge Jeanine asked why House Speaker Nancy Pelosi (D-CA) isn’t calling for a formal vote to open an impeachment inquiry, President Trump said it was because she “can’t get the votes because we’re [the GOP] doing so well right now.”

Asked why he thinks Biden has no fear about calling for impeachment towards President Trump amid the reported Ukraine controversy, Trump said, “Well, it’s incredible the way the media sticks up for him. They say it’s unsubstantiated and yet, it’s not. He walked away, and I guess the new numbers is $168 thousand a month between him and his friends. He knows nothing about energy, he knows nothing about oil, nothing, zero. And he walked away with millions of dollars, … it’s just illegal. … And then he goes to China, … they don’t give you a billion [and] five for nothing! He walked out with 1.5 billion dollars out of China.”

“It’s a payoff, a total payoff and the press doesn’t want to pick it up,” the President continued and pointed out when Biden was heard on camera bragging about getting the Ukrainian prosecutor fired. “That is called quid pro quo!” (Video Below)

Asked where is Barack Obama in all of this and why haven’t we heard from him, the Commander in Chief replied, “I think he’s hiding. I think he knows all about it. We’re talking about investigate the investigators. We’re talking about the beginning. It was really before I took office. If you look at the insurance policy with [Peter] Strzok and [Lisa] Page, just in case [Hillary] should lose, we’ve got an insurance policy. That’s what all of this stuff has been about, the insurance policy. These are bad people, these are evil people.” [Emphasis added].

“We’re winning and we’re winning big,” President Trump said. “That’s why I think they want to stay away. If you look at what’s happening, the electricity for the Republican Party, they’re so angry at what’s taken place. Everybody knows that Shifty Schiff, he made up the story, he made up my phone call!”