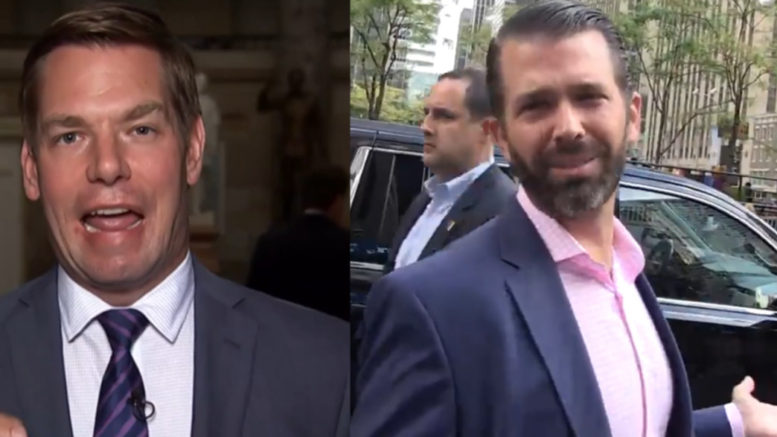 Rep. Eric Swalwell (D-CA) suggested Friday that controversial “red flag” laws should be used against conservative political commentator Ben Shapiro after seeing a clip on Twitter that made it appear that Shapiro was advocating for violence.

President Trump’s son, Donald Trump Jr., however fired back at “Tin Foil Hat” Swalwell, who suggested “out loud” that “he would weaponize red flag laws to confiscate guns from decent and law abiding citizens.”

Former Congressman Robert Francis O’Rourke, aka Beto, a self-given nickname in order to sound Hispanic, told a live television audience at CNN’s LGBTQ town hall discussion Thursday night that any and all religious institutions would lose their tax-exemption if they did not believe in same-sex marriage. This means all mosques, temples, most Christian churches, and thousands of colleges and schools would all lose this special status if they support solely traditional marriage, reported Town Hall.

“There can be no reward, no benefit, no tax break, for anyone or any institution, any organization in America that denies the full human rights and the full civil rights of every single one of us,” O’Rourke said. “And so, as president, we’re going to make that a priority, and we are going to stop those who are infringing upon the human rights of our fellow Americans.”

Ben Shapiro responded to O’Rourke’s comments made during Thursday night’s LGBT town hall on CNN, and Shapiro, however, was not advocating violence.

Ben Shapiro said of Democratic candidate Beto O’Rourke,”You want a culture war in this country? You d**n well have it, Beto O’Rourke. You want a culture war in this country? You want this country to come apart at the seams? This is how you do it. Because I promise you: If you come to tell me that you’re going to indoctrinate my kids on a particular policy and that I can’t pull my kid out of the school and send my kid to a school that I want to send them to. That I can’t go to the church or synagogue that I want to go to.” (Continued Below)

“And if you make that national policy, not just California policy where I can move, but national policy? People are not going to stand for that. They are not going to stand for that. And if you send a truant officer to remove my child, I have two choices at that point, right? If I have no place to move because you have now made this national, federal policy,” he contined.

“I now have two choices: One, is to leave the country utterly. Two is to pick up a gun. Those are the only two choices that you have left me. It’s not extreme to defend the fundamental rights the Constitution was created in order to protect,” Shapiro added. “These rights pre-exist government.”

Rep. Swalwell responded to Shapiro from his Friday podcast to push a different narrative. (Continued Below)

Swalwell tweeted on Friday to Shapiro, “Please tell me this lunatic does not own a gun. Reason 1,578 America needs red flag laws.”

Donald Trump Jr. responded to Swalwell on Saturday and wrote, “This is exactly why so many are reluctant to even discuss the subject. Everyone knows that leftist activist like Tin Foil Hat Swalwell would immediately weaponize ‘Red Flag Laws’ to confiscate guns from decent & law abiding citizens. That’s their plan! He’s saying it out loud!”

Instead of debating Trump Jr., defend second amendment rights, or deny that he would not confiscate guns from law abiding citizens, Swalwell deflected and suggested that the President’s son will be a “felon”. The California Congressman responded to Trump Jr. and wrote, “You should worry more about ‘felon in possession’ laws.”

Swalwell, last November, engaged on Twitter in a back-and-forth with former Infowars, Joe Biggs, who commented on an article from a USA Today op-ed written by the Congressman titled, Ban assault weapons, buy them back, go after resisters: Ex-prosecutor in Congress.

Swalwell suggested in a tweet that “the government use nuclear weapons” against those who did not obey with a “hypothetical” gun ban. “And it would be a short war my friend. The government has nukes. Too many of them. But they’re legit….” Swalwell wrote. (Continued Below)

Pertaining to Swalwell’s “felon” remark aimed at Trump Jr., Robert Mueller released his report in April, to which is states: “[T]he investigation did not establish that members of the Trump Campaign conspired or coordinated with the Russian government in its election interference activities.”

Swalwell was convinced that Trump Jr. was a criminal and that Mueller’s report would prove that, as he claimed in one such inteview on CNN in 2017 that “Trump Jr.’s emails showed a ‘eagerness to collude’ with the Russians.”

Mr. Mueller said he decided not to pursue criminal campaign-finance charges against Mr. Trump Jr. or other members of the campaign related to the June 2016 Trump Tower meeting with a Russian lawyer linked to the Kremlin, because he believed it would be difficult to prove both that the campaign officials knew their conduct was unlawful and that the value of the information promised to the campaign in the meeting exceeded the $2,000 threshold for a criminal violation, according to the Wall Street Journal.

Investigators did not finding evidence that the meetings participants—who also included Mr. Kushner and then-campaign chairman Paul Manafort—were familiar with laws banning foreign contributions to a campaign. Mr. Mueller also said the government did not have “strong evidence of surreptitious behavior or efforts at concealment at the time of the June 9 meeting,” as per WSJ.

Mr. Mueller also said the first amendment could restrict a prosecution on such charges. “The Report confirms that the June 9, 2016 meeting was just what Don said it was, and nothing more, and that there was nothing improper about potentially listening to information,” said Alan Futerfas, a lawyer for Mr. Trump Jr., WSJ reported. (Video Below)

Please tell me this lunatic does not own a gun. Reason 1,578 America needs red flag laws. https://t.co/NA9IPs0CDV

This is exactly why so many are reluctant to even discuss the subject.

That’s their plan! He’s saying it out loud! https://t.co/TXQCzbgdQB

Rep. Eric Swalwell suggesting Don Jr. will be a “felon”:

You should worry more about “felon in possession” laws. https://t.co/y5X7IH9KeO

Pres Trump Reacts As Nadler Prepares To Subpoena The Mueller Report: ‘Behind Closed Doors The Dems Are Laughing’