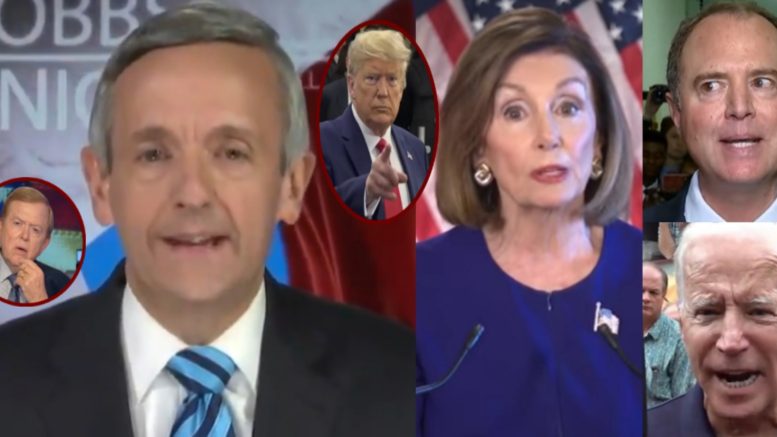 Christians around America are angry about Democrats’ bold attempt to impeach President Trump, according to Pastor Robert Jeffress.

While joining Lou Dobbs, Pastor Jeffress expressed his concern if “Dems and RINOs succeed” in impeaching President Trump and remove him from office and warned viewers “we’re finished” if it happens.

Jeffress mentioned how he has traveled around the country in recent days and was met with an overly negative reaction from fellow Christians who are disgusted by the extent Democrats are going to take down President Trump.

“I’ve never seen Christians as angry about anything as they are about this attempt to remove this President from office,” Pastor Jeffress said.

“They know that the only impeachable offense he has committed was beating Hillary Clinton in 2016,” he added. “That’s the unpardonable sin for which the Democrats will never forgive him.”

“He is the most pro-life, pro-religious liberty, pro-conservative judiciary President we have had in history,” Jeffress declared.

“And, if he is removed this country is finished,” he concluded. “It is time for Christians to stand up and say we are mad as H-E double L, and we’re not going to put up with this any longer! It’s time for every Christian, every Conservative to stand up and be counted! That’s what we call righteous indignation.” Video Below

“@realDonaldTrump beating Hillary is the only unpardonable sin for which the Dems will never forgive him!” @RobertJeffress on the Dems’ relentless impeachment push. #AmericaFirst #MAGA #Dobbs pic.twitter.com/oVoYmjMtCV