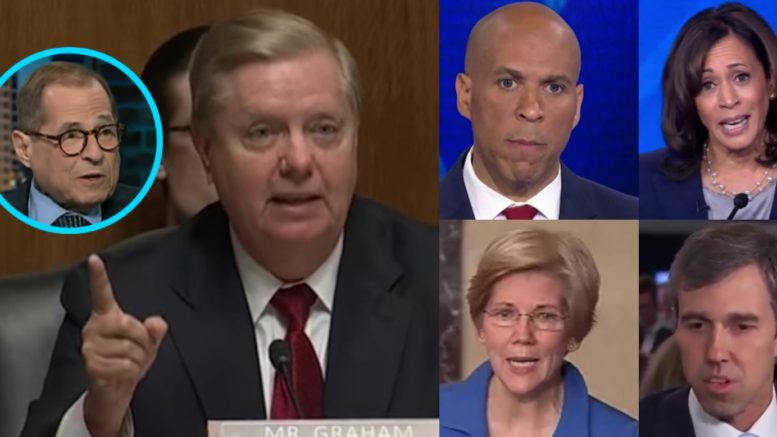 Senator Lindsey Graham had some words of wisdom for his colleagues on the left, specifically Democrat Presidential candidates who are calling on Supreme Court Justice Brett Kavanaugh’s impeachment.

Democrat candidates, including Beto O’Rourke, Kamala Harris, Cory Booker and Elizabeth Warren, have called for Kavanaugh to be impeached all because of what an unverified New York Times article alleged.

In an opinion piece released on Saturday, authors from the New York Times claimed to have new corroborations to Debrah Ramirez’s accusation that Kavanaugh exposed himself to her, and the report suggested law enforcement and the Senate Judiciary Committee didn’t investigate the matter thoroughly enough.

Fast forward to Monday, and the Times updated their article to include the fact that Ramirez doesn’t directly have a recollection of the episode, as it began to look more and more apparent that the report was nothing but another calculated hit job on Kavanaugh.

In wake of the calls for impeachment, Politico reported that House Judiciary Chairman Jerry Nadler has decided to “throw cold water” on Kavanaugh’s impeachment, citing that he is too “tied up” with trying to impeach the President.

Nadler is quoted by Politico as saying in an interview: “We have our hands full with impeaching the president right now and that’s going to take up our limited resources and time for a while.” Continued Below

As a result of Nadler’s statement, Senator Lindsey Graham issued a “word of advice” to Democrat Presidential candidates.

Graham tweeted a link of Politico’s article and captioned it, “A word of advice to the Democratic presidential candidates calling for Kavanaugh’s impeachment: Even Jerry Nadler figured out that impeachment of Brett Kavanaugh, based on this ridiculous accusation, is a Bridge Too Far.”

“If Nadler isn’t willing to go there……..NO ONE should go there!” he declared. See Below

During Kavanaugh’s confirmation hearing, Lindsey Graham is best known for ripping his fellow Democrat Senators on the Judiciary Committee a new one over their smear tactics used against Kavanaugh.

Some of the same Senators who were on that particular committee at the time include the same Presidential candidates calling for Kavanaugh’s impeachment now.

You can get a refresher of Graham’s lashing out session during Kavanaugh’s hearing by CLICKING HERE. Video Below

In ending, here is video of Dan Bongino weighing in on the article by The New York Times: