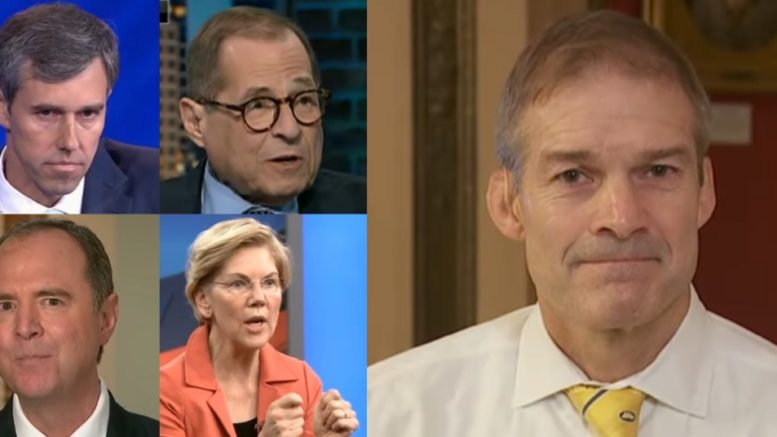 On Monday, Congressman Jim Jordan took a moment to put weigh in on a statement made by his colleague Rep. Mark Meadows, who was reflecting on the Democrat Party and their agenda moving forward.

Meadows wrote in an earlier tweet, “When someone shows you where they stand, believe them.”

“Democrats have repeatedly made it clear they want to control every aspect of your life—your healthcare, your job, your finances, and even what you eat,” Meadows continued. “They are showing you they’re becoming a socialist party. Believe them.”

They want to take away your Freedom.”
See Below

They want to take away your Freedom. https://t.co/PT9JcB1n3F

The initial tweet by Meadows came as Democrat candidates for President have been pushing the concept of taking away guns, straws, lightbulbs, cheeseburgers, and more to further their agenda.

Democrats have also ignited fresh calls to impeach Supreme Court Justice Brett Kavanaugh in wake of a “smear story” done by the New York Times. While House Democrats have had their hearts set on trying to find a way to impeach America’s duly-elected President.

Taking all of that into account, it’s apparent how both Jordan and Meadows could think this is a scary time for Americans as far as freedom is taken into account.

In ending, here is a recent video of Rep. Jordan where he blasts Democrats’ socialist ideology.

MSNBC Guest on Inflation & High Gas Prices: ‘You’ve Got to Stop Complaining…Calm Down & Back Off’

Sen. Kennedy On The Left’s Push To Cancel ‘Snow White’ Ride At Disneyland: “We Are So Screwed”