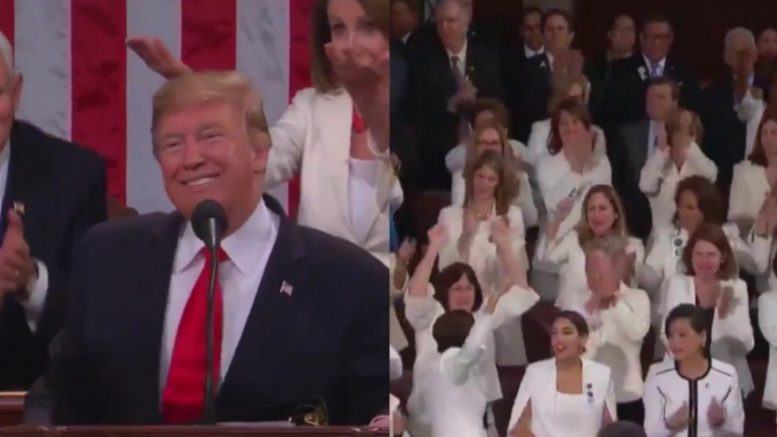 This year’s State of the Union Address struck a stark contrast early on compared to President Trump’s 2018 Address.

In 2018, the State of the Union was lopsided as majority of Democrats sat down almost the entire time, while Republicans cheered him on. But this year’s address was marked by celebration from both parties, and even stunning “USA” chants.

The first “USA” chant came from Republicans after President Trump announced that the State of our Union is “stronger than ever.”

And then, just minutes later, Trump touched on milestones reached by American women, which brought both sides of the aisle to their toes.

Trump announced, “We have more women in the workforce than ever before.” And as both sides cheered that on, he told them to hold on cause he had even better news.

Trump then said, “We have more women serving in Congress than at any time ever before.”

Related Article: Sarah Sanders Signals Crunch Time For Dems: ‘Will They Decide They Love Our Country More Than They Hate This President?’

Terrence Williams Levels Snoop Over His F-Trump Rant: ‘Where Was You When Obama Did The Government Shutdown?’