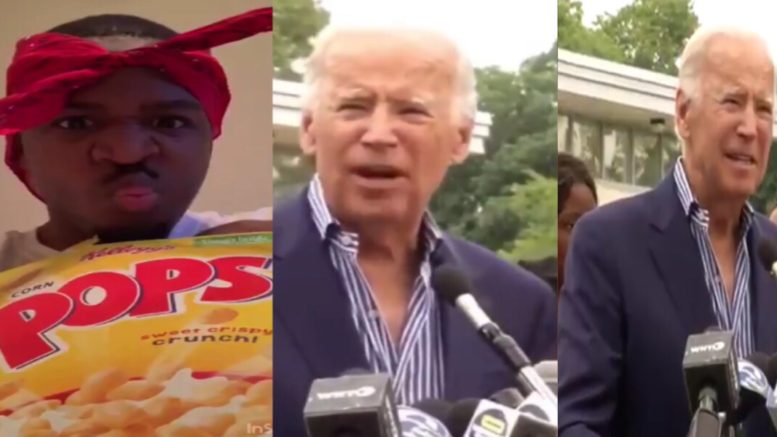 A video clip that surfaced from 2017 shows former Vice President Joe Biden describing an alleged story in which he avoided a “razor-and-chain fight” with a gangster named “Corn Pop.”

Biden recounts the story of when he was serving as the only lifeguard at a predominately black Delaware pool in the summer of 1962.

“This was the diving board area, and I was one of the guards, and they weren’t allowed to — it was a 3-meter board. And if you fell off sideways, you landed on the damn, er, darn cement over there,” Biden said.

“And Corn Pop was a bad dude. And he ran a bunch of bad boys. And back in those days — to show how things have changed — one of the things you had to use, if you used Pomade in your hair, you had to wear a baby cap. And so he was up on the board and wouldn’t listen to me. I said, ‘Hey, Esther, you! Off the board, or I’ll come up and drag you off.’ Well, he came off, and he said, ‘I’ll meet you outside,'” Biden continued.

“My car was mostly, these were all public housing behind us,” Biden continued. “My car – there was a gate on here. I parked my car outside the gate. And he said, ‘I’ll be waiting for you’. He was waiting for me with three guys with straight razors. Not a joke,” Biden went on to say.

“There was a guy named Bill Wright the only white guy and he did all the pools. He was a mechanic. And I said, ‘What am I gonna do?’ And he said. ‘Come down here in the basement, where all the mechanics- – where all the pool builder is.’ You know the chain, there used to be a chain that went across the deep end. And he cut off a six-foot length of chain, and folded it up and he said, ‘You walk out with that chain, and you walk to the car and say, ‘you may cut me man, but I’m gonna wrap this chain around your head,” he said. (Continued Below)

Terrence Williams, however, acted out a skit pretending to be “Corn Pop” with a red bandana wrapped around his head, while he ate a box of Corn Pops.

“Hey, yo sucka! Keep my name outta yo mouth,” Terrence expressed, acting as a gangster. “Whatchoo talkin’ about? You promised me you would have my food stamps if you became Vice President. Where [is] my food stamps at sucka? You better have them by Monday.”

“And what [did] I tell you about snitching on me? Now you owe me 10 boxes of Corn Pops homey. You bett[a] have my Corn Pops asap. And why didn’t you and Obama let me outta the pen when ya’ll was in office? he asked. “Sitting there the whole time. So you know we gotta problem.” (Video Below)

Existing newspaper reports uncovered by CNN reporter Daniel Dale revealed that an individual nicknamed “Corn Pop” did live in Wilmington, and died in 2016 at the age of 73. A former Wilmington mayor confirmed that the individual was the same person to whom Biden was referring. Additionally, a gang called “the Romans” did exist, Dale found.

(Related: Terrence Williams Humiliates Bernie For Punching Himself In The Face With Boxing Speed Bag)

Scarborough & Mika Ridicule Joe Biden Over His ‘No Malarkey’ Bus Tour: Somebody Has Spiked His ‘Milk Of Magnesia’