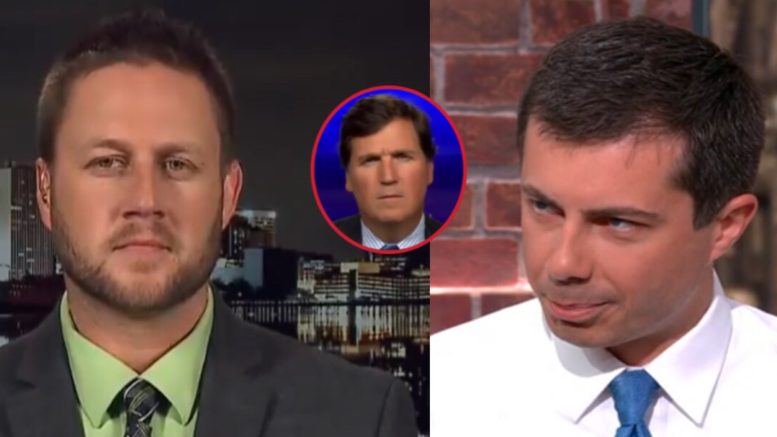 Pete Buttigieg’s brother-in-law Ryhan Glezman, who is a pastor, spoke with host Tucker Carlson on Fox News Tuesday where he reacted to Mayor Pete using the Bible to justify abortion.

Last week, Buttigieg claimed during an interview on The Breakfast Club podcast that human “life begins at breath”, justifying abortion, even after a baby is born.

“There’s a lot of parts of the Bible that talk about how life begins with breath,” Buttigieg said while discussing abortion. “Even that is something that we can interpret differently.”

Ryhan Glezman, however, believes that Buttigieg is misrepresenting Scripture to push a pro-abortion agenda and calling on his brother-in-law to repent.

“I would like to make a plea to Pete Buttigieg, my brother-in-law, that he would reconsider his position and the way he is misrepresenting scripture to push this pro-abortion platform that he is pushing. I’d like to make a plea with him that he would reconsider and actually open his Bible and ask all people to open up there Bible’s… turn to Soloman 1:39, specifically, verses 13-16,” Glezman said.

“How can you read those passages that talks about we are fearfully and wonderfully made in the image of God and intrinsically we’re woven together in the woman’s womb? I don’t know how you can read that and come out of that with any other understanding that life begins at conception,” he continued. (Continued Below)

“What’s even more alarming is that there’s Christians who would stand like Mayor Pete would and say that God condones, God says abortion is okay according to scripture. That’s just absurd and outlandish to me,” Buttigieg’s brother-in-law expressed.

Asked in his view if there is any Christian interpretation in the Bible that leads to the conclusion of the New Testimate implying that “abortion is fine until the child draws breath”, Glezman responded, “Absolutely not. I would encourage all people to look at Scripture, to Soloman 1:39, that we are created and life begins at conception.”

“This isn’t a political thing to me, this a spiritual thing to me– this is a God issue, this isn’t even my opinion or Pete’s opinion. What does God say? What does the word of God truly say? And the Bible is just being misrepresented and misused to push a pro-abortion agenda. And that is alarming, it’s disgusting, it’s frightening, and it needs to stop,” he added. (Continued Below)

Asked if he has said this to his brother-in-law, Glezman responded, “I have not spoken this directly and I hope he sees this. I hope all people watch this and he will reconsider– he will change his position, he will actually open up the Bible and read through Scripture– what Scripture actually says.”

“We need to create a culture that speaks human life and human beings that have a value. We are commanded by Christ himself to uphold the dignity and respect of all human life. We need to stand for all the born and all the unborn,” he said.

Tucker pointed out that Buttigieg says he is running a “deeply Christian campaign”, but Glezman said, “I don’t know how anyone– I mean, what happens, we see in Peter 2:4 that there’s a time coming where people will turn away from sound doctrine and accumulate teaching to itch their ears. Basically, what that verse reads is people weren’t living in a time now we see with Mayor Pete– that people are drifting away from sound doctrine to make the scripture say whatever they want to do– to manipulate and distort Christianity and what the word of God says to meet their own desires and their own pleasure.”

“Really it boils down to this: people either seek power or they’re gonna stand up for the powerless. The baby in the womb, in the mother’s womb, is powerless. It’s the most vulnerable person, a human life. So, people need to make a decision, and Pete has to make a decision. Are you gonna stand up for the most vulnerable or [are] you gonna seek the power and distort Scripture to meet your own political agenda? That’s exactly what we’re seeing, not just with Pete, but the whole Democratic party, right down the line,” he said. (Video Below)

He also hopes to see a Democrat stand up for human life and not go down the same trail the rest are following. “I think that life in the womb is valuable and has intrinsic value; I like to see someone stand up and do that,” Glezman said.

(Related: Huckabee Reacts After Mayor Buttigieg Appears To Justify Abortion After Birth: ‘King Herod Tried That; So Did Pharaoh’