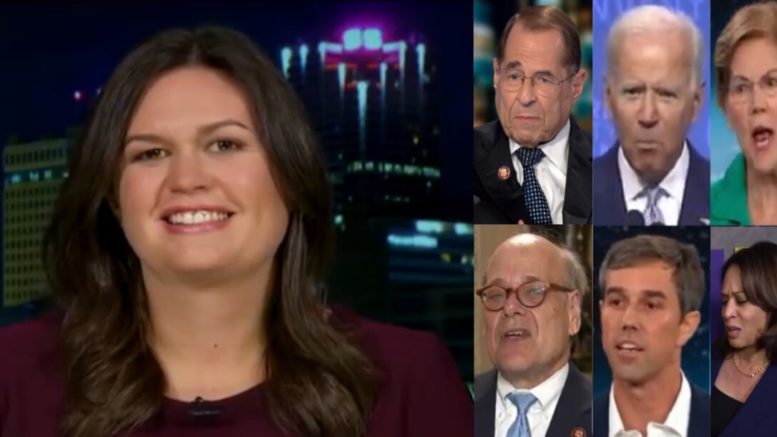 She also ripped House Democrats and suggested they that she wasn’t sure “they even like America.”

“I think Donald Trump, the reason you saw him so happy, so joyful tonight, not only because the country is doing well, but because if this is the best the Democrats have to offer, then the President has to be elated. Honestly Sean, I’m not even sure why any of these candidates are running. They seem to all have such a dislike for this country dislike for American citizens,” Sanders explained.

Trump held a rally Monday evening in North Carolina just hours to go before voters headed to the polls in a pivotal toss-up special election that will decide the winner of a long-contested — and long-vacant — House seat, as reported by Fox News.

Sanders pushed back at the Democratic presidential candidates and asked if they knew why they were running. “The policies and these individuals are pushing is beyond hard to comprehend– why anyone would support these individuals… I’m not even sure Joe Biden knows what election he’s in and what position he’s running for. He seems to be so confused all the time. I hope that this is the best we have coming out of the Democrat party because if it is, we’re gonna have another great four years of President Trump come 2020,” she expressed.

“Not only is the President winning on campaign promise after campaign promise, but he’s doing it on his own without the help of Democrats in Congress,” Sanders pointed out. “They’ve spent every minute of the President’s term fighting against him and trying to tear him apart, instead of building this country up.” (Continued Below)

“They just this week, they finally come back to work and the only thing that they can do is try to figure out how to impeach the President,” Sanders said.

“I’m pretty sure they don’t even like America,” Sanders added. “If you listen to what they’re saying, everything they have to say is so negative. And you saw the exact opposite of that from the President tonight,” Sanders said. (Video Below)

“I hope that people will continue to look at that contrast and see that you have somebody who loves this country, loves all of the citizens of this country, versus the Democrats who have nothing to do but take the President, attack this President, try to tear him down,” Sanders concluded.

(Related: Sarah Sanders Exposes Three Dem ‘Lies’ That Almost Make Her ‘Feel Sorry’ For Them: ‘Maybe They Should Stop Lying’)